The good old TMC2130 chip has fallen out of favor thanks to newcomers like the TMC2208/9. It is still top-shelf stuff and the preferred driver by Prusa for the Einsy Rambo as well as their MMU control board.

New chips are cheaper and cad drive more current, but the 2130 sill has one thing you can’t beat – it can handle voltages up to 46V.

Here is an example of a motor driver in the same PCIe form factor with external 3.5mm power terminal block. This allows the driver to use high voltage for example 36V or 42V to drive beefier motor. 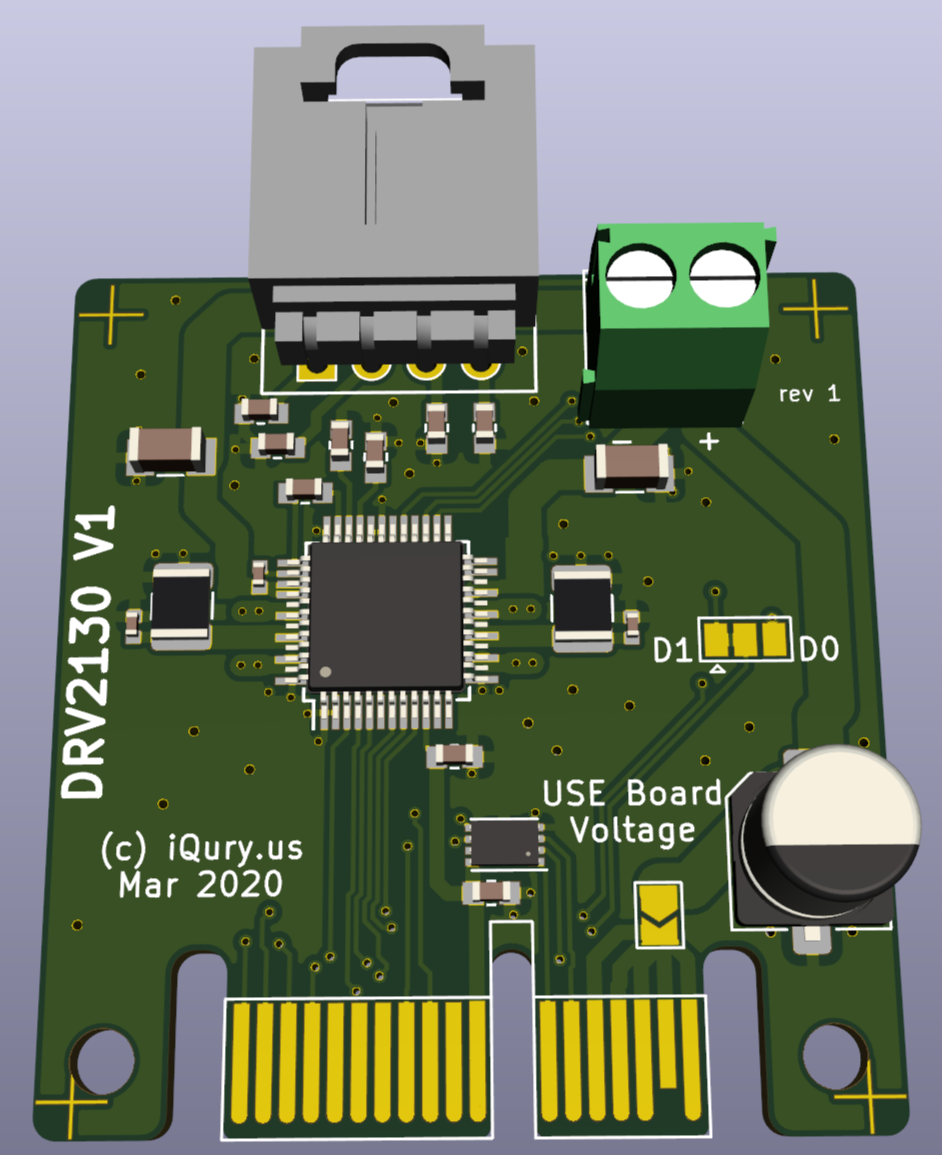 The solder jumper on the bottom can be shorted and then the driver would take power from the carrier board.

I wanted to push my TMC2209 driver design to high-er current. The driver chip is relatively small and even at moderate 1.3A RMS motor current it gets very hot very fast.

Now to be fair 1.3A RMS is probably more than enough to drive most NEMA17 stepper motors. However every once in a while one can get a 1.6A motor or in my case a 1.7A motor. Now in most cases it is not required that you drive the motor with it’s maximum rated current, I just wanted to push the driver and see how it fairs under load.

Here is a picture of my very messy desk with the test setup: 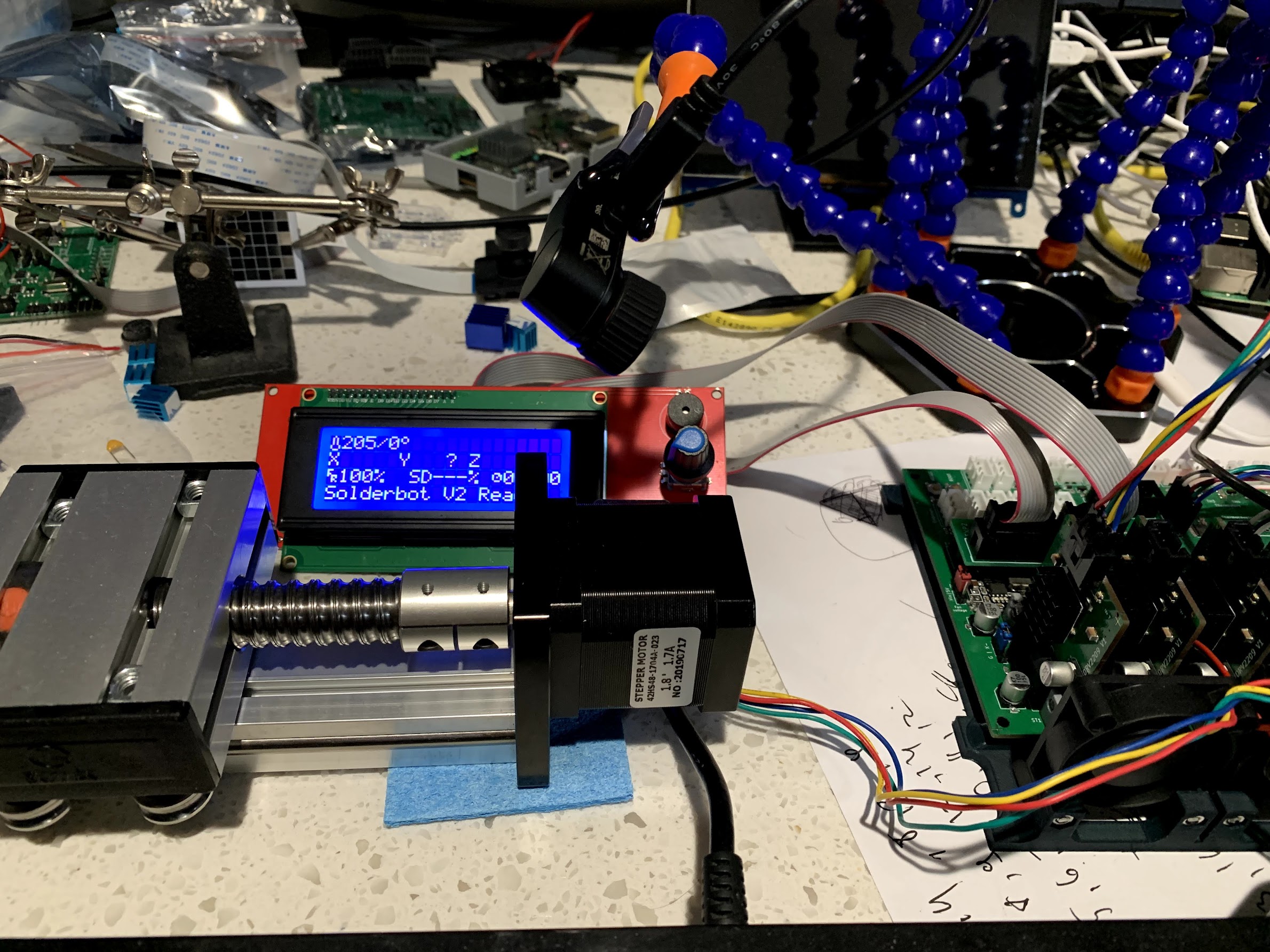 I have my 1.7A NEMA17 motor on a linear rail I used for the test. Above it you can spot my Seek Compact Pro thermal camera. It is not the most accurate instrument, but does the job +/- 5 degree C.

Here is a picture of the temperature of the board after about 15 minutes of moving the axis back & forth: 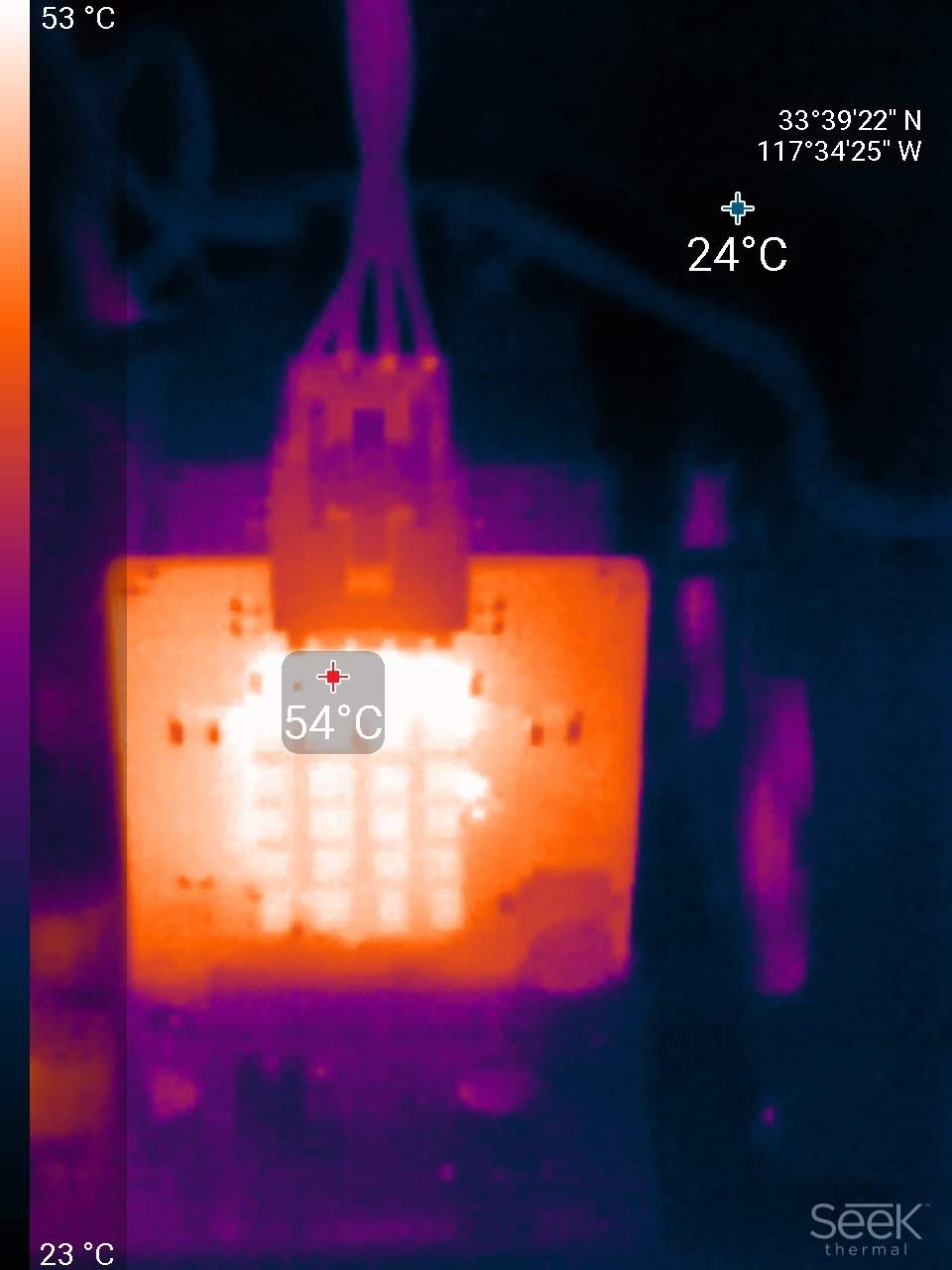 The hottest spot is around 54C. While the colors are very dramatic, this is quite cool for this type of setup.

The back side was about 45C: 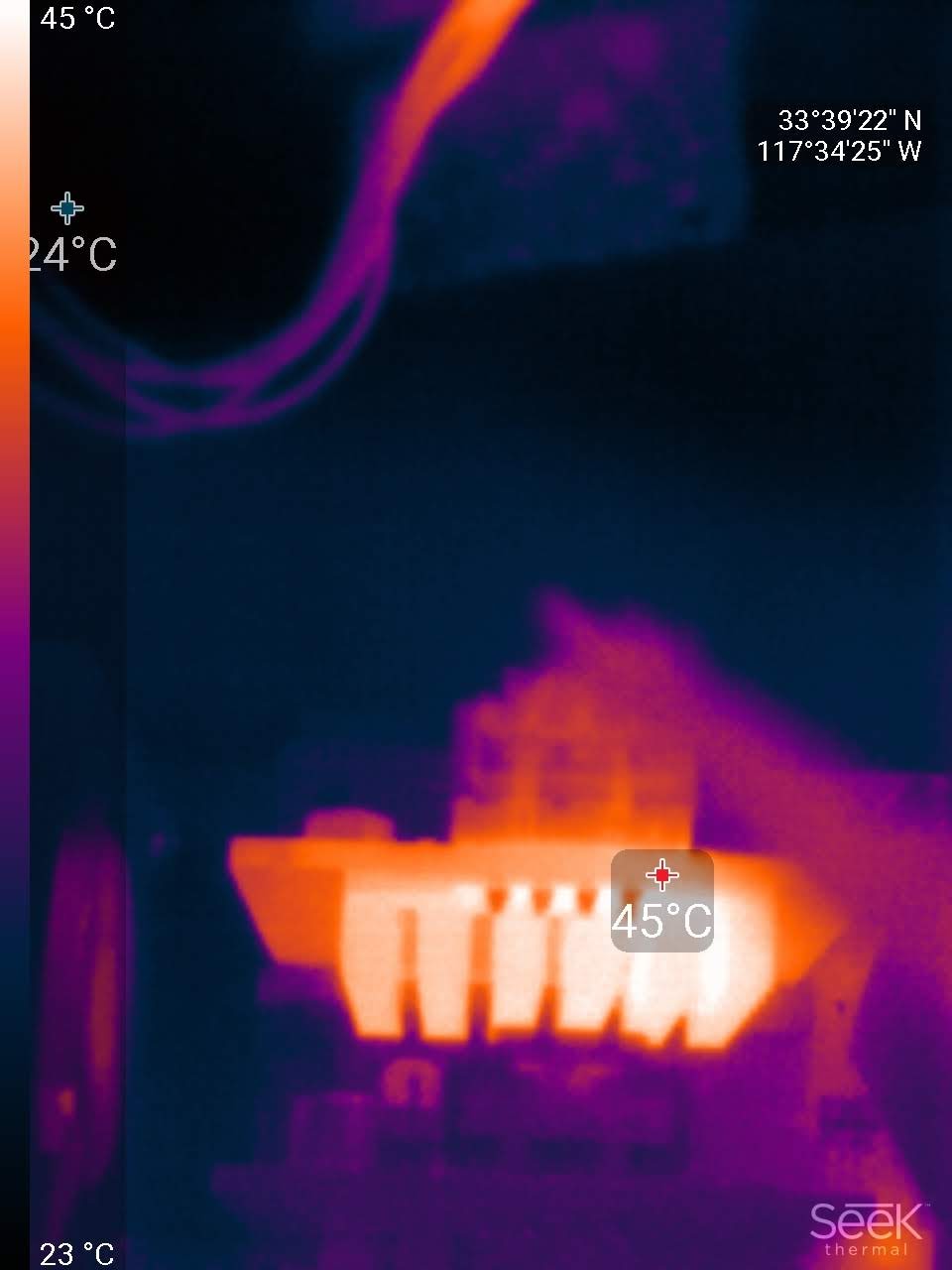 In conclusion the test was very successful. In previous experiments the drivers would heat up to 70C. In this setup 54C was quite reasonable for the amount of current the driver was handling.

I was perusing trough the parts catalog offered by JLCPCB for their assembly service and found this awesome micro controller  STM32H750VB it is quite an upgrade over the good old F407 part. It runs newer Cortex-M7 ARM core, it has double precision FP unit and can run at sweet 480MHz. Best of all it was mostly pin compatible with the F407. I had to re-route one side of the pins, but it was fairly quick.

The only down side is that the build-in flash is a bit limited – 128KB, but I think I can work with that. I’ll order some boards with that processor once the factories in China are bully back in business.

The updated design is on my github page in the “new_cpu” branch.

This board was partially assembled by JPCPCB, I populated the connectors. I wish I could find some colored 3 pin JST XH connectors for the end stops. 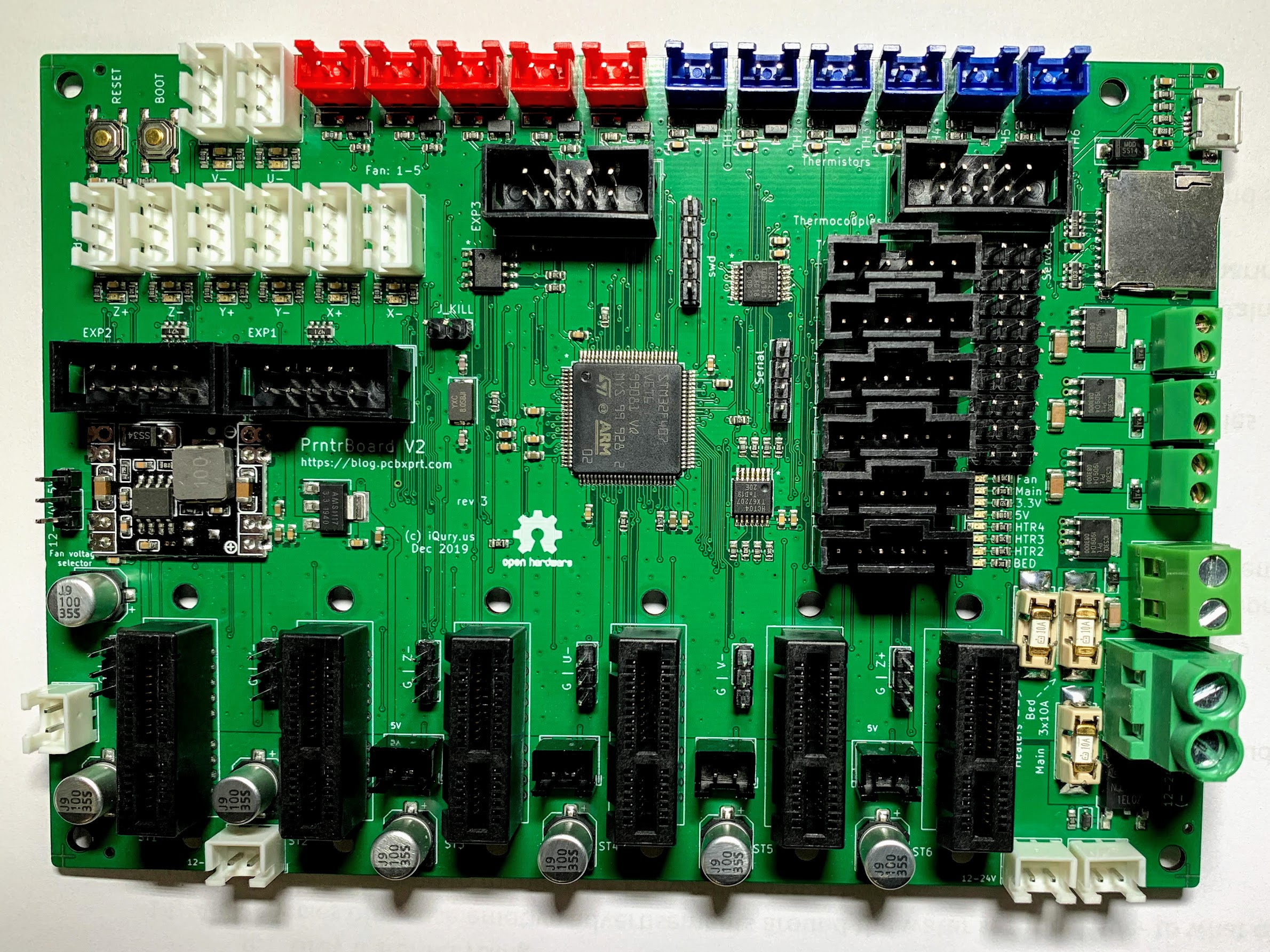 There is no shortage of weirdness when it comes to the popular RepRap LCD connectors. The traditional connector is dual 10-pin IDC male sockets. 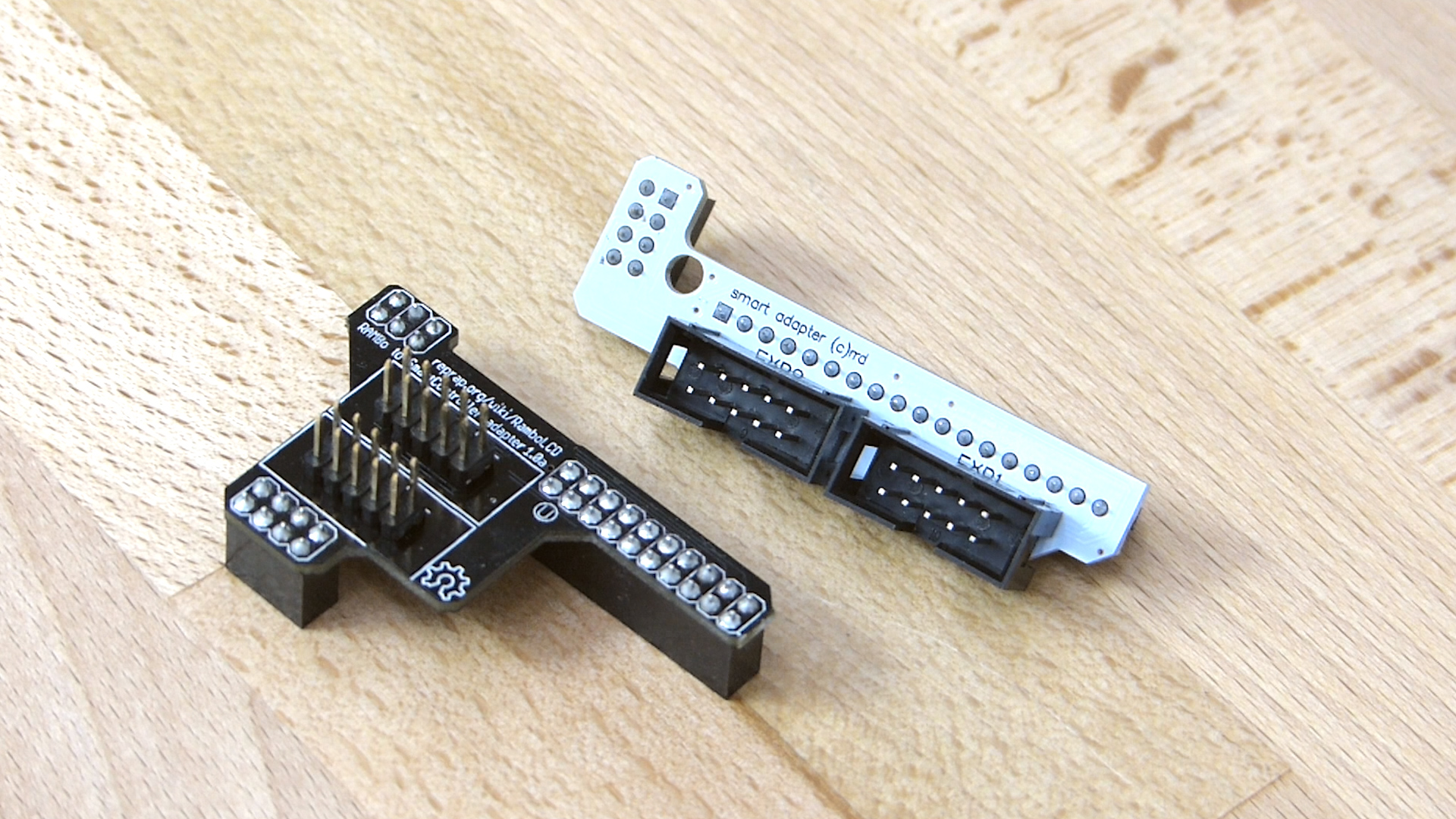 Alas it appears that someone made a mistake in the original schematics, so now some LCD panels have the connectors backwards. For example the FYSETC Mini 12654 Panel.

I had to create this small adapter to easily flip the direction of the wires: Here it is i use in my PrntrBoardV2 test prototype: 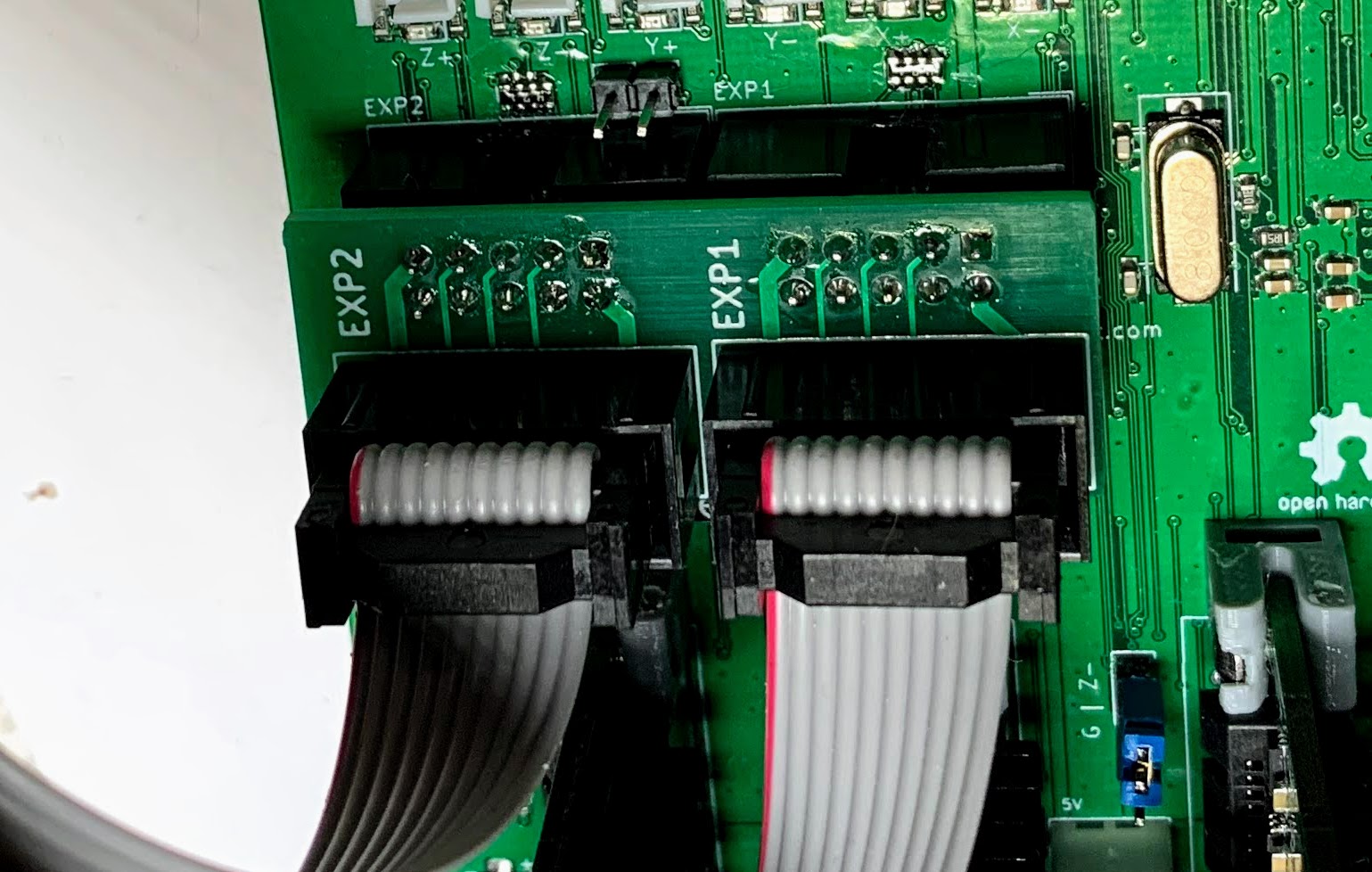 I’ve been busy over the holidays. Here is a summary of the recent progress with the PrntrBoard V2 3D printer controller.

I decided to give the JLCPCB SMT Assembly service a try and ordered some TMC2209 driver boards as well as some semi-assembled PrntrBoard V2 controllers. Overall I was quite happy with the results.

Here is a picture of the driver boards. I tested all of them and they worked flawlessly out of the box. 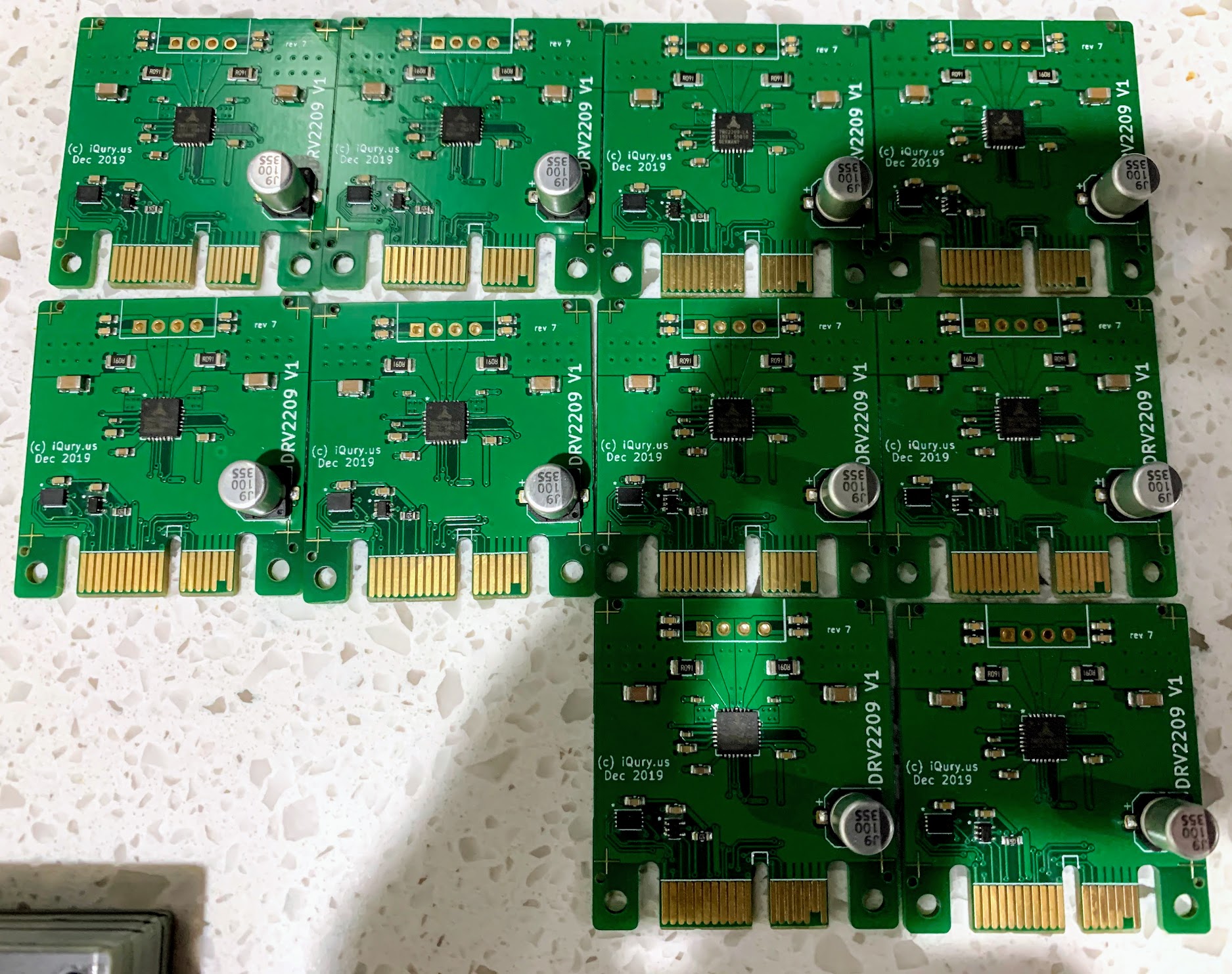 These are the semi-assembled controllers. I use semi-assembled, because only the SMT components were populated and I have to spin my soldering robot to work on the thru hole connectors. Next I tested the sensorless homing capability of the TMC2209 drivers. After some tuning of the sensitivity parameter is works very well. You can see one linear rail axis homing with no sensors in this video:

I also decided to work on improving the mounting of the drivers to the board. The driver boards were not very stable in the PCI Express slots and I designed these little plastic holders to fix them in place. 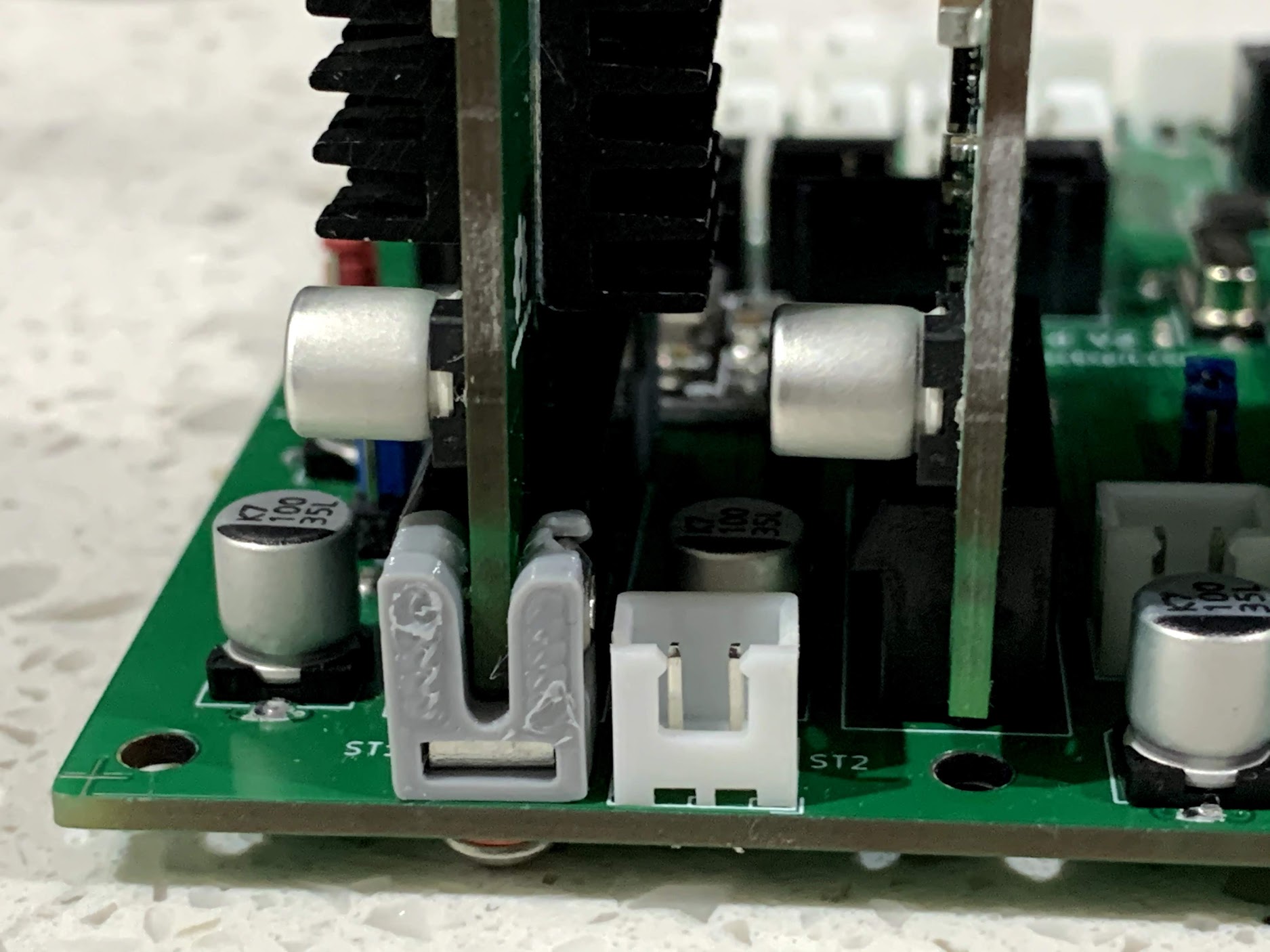 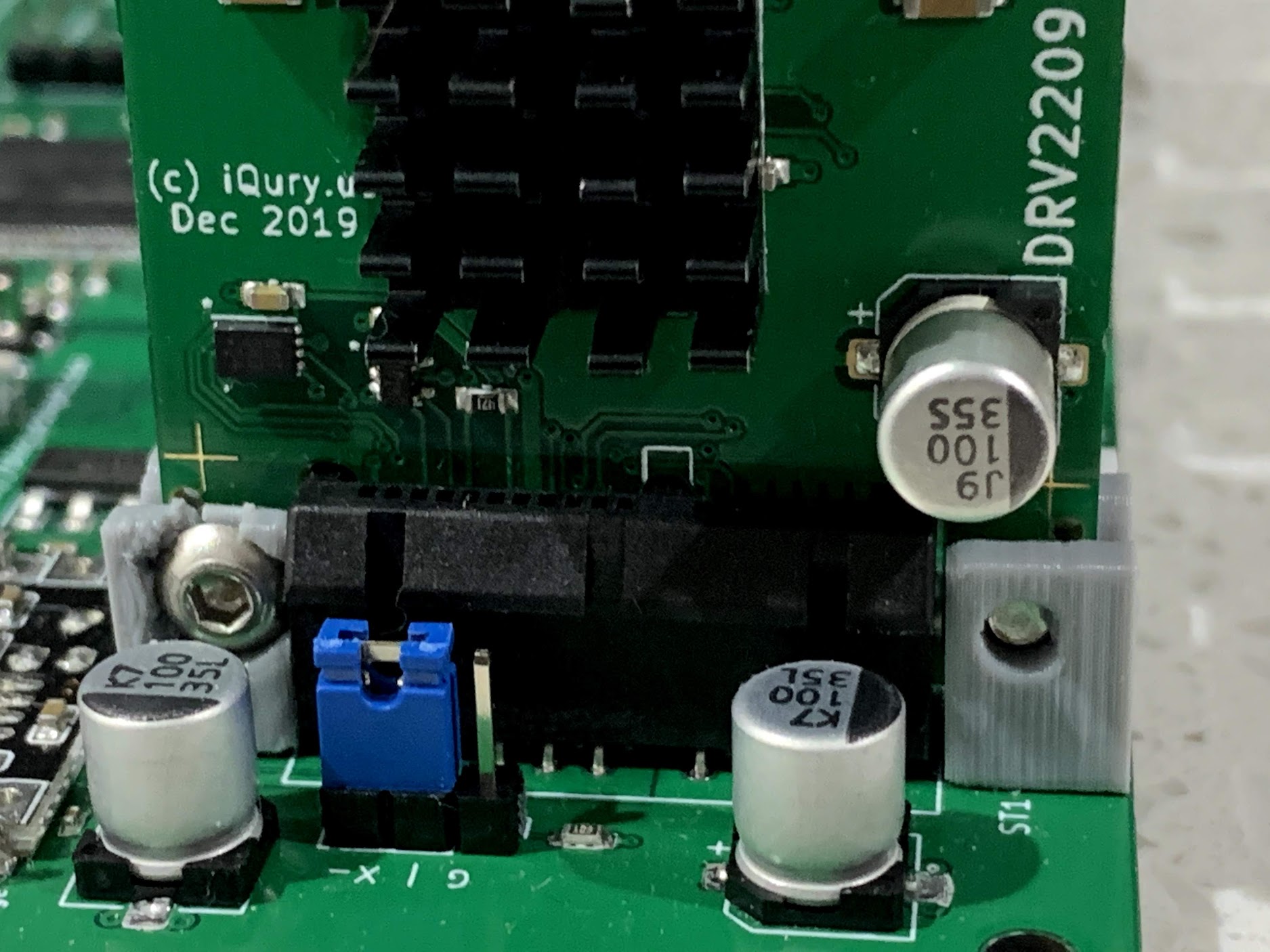 They are bolted to the bottom of the controller PCB. The drivers are very well affixed in place. 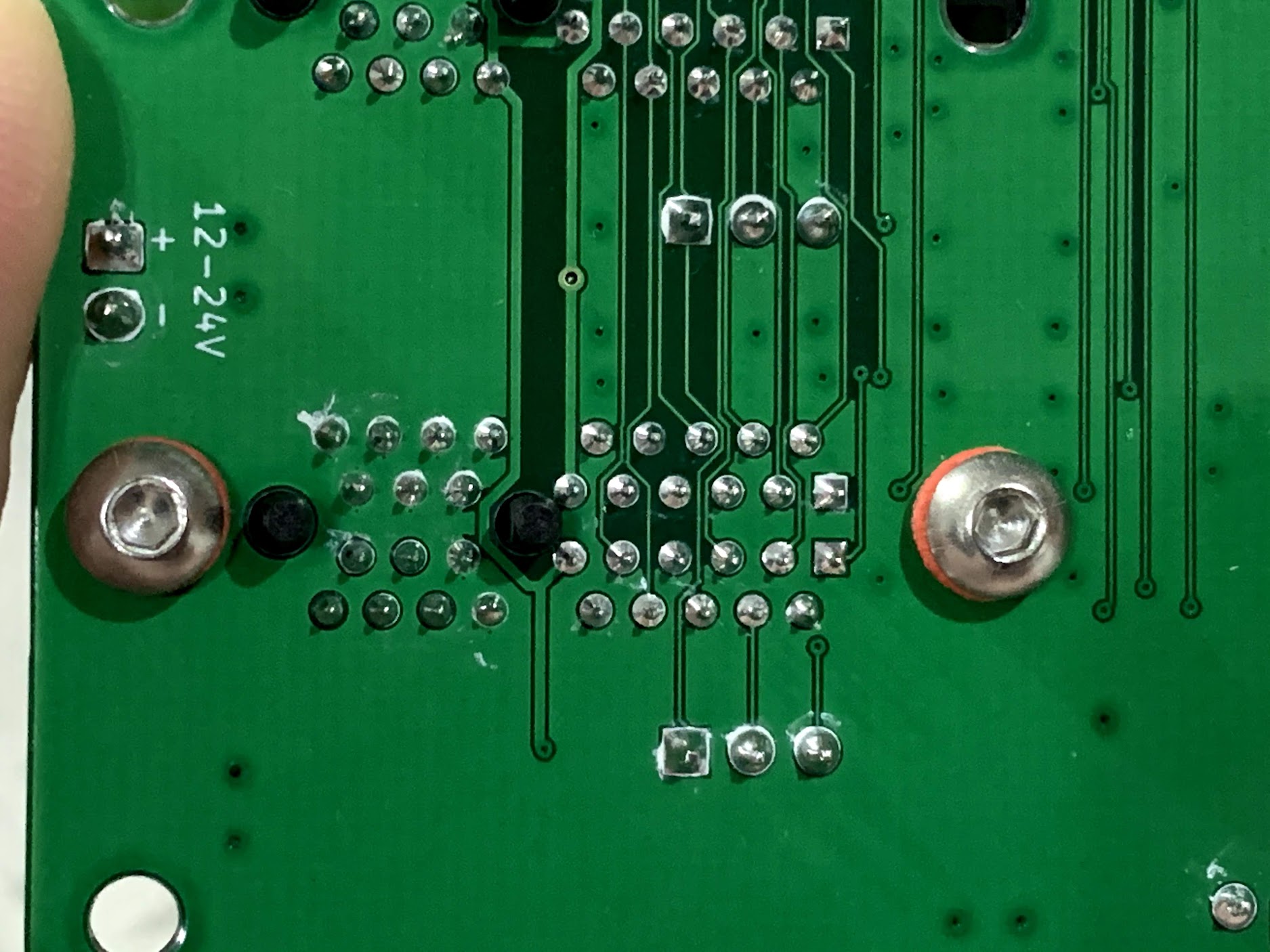 While I was trying to get my 2004 LCD panel to work with the controller, I found that not all “standard” EXP1 and EXP2 connectors have the same orientation. At first I though that the SKR 1.3 board, just has them backwards, but I then found this article on the RepRap discussion forum. It appears that the original schematics had an error and now some boards/displays are just backwards. I quickly flipped the connector on my 2004 display and with worked, but this can be quite frustrating.

I made a small PCB that one can use to flip the polarity of the connectors. “To flip or not to flip” seems to be ongoing question.

I tried to do some thermal testing on the TMC2660 drivers. First I tried running my puny motor at 2A with a 60cm 5V fan blowing at the driver. This kept the driver quite cool, which was a not interesting.

I was planning to run all 3 axis at the same time, but my heat sink was just a bit too tall and was touching the other driver :-(. I ordered slightly shorter ones, but they have to swim trough the pacific ocean first.

While I was enjoying torturing the poor motor at it’s rated limit. The thermal camera picked an unusual hot spot on the board. The reverse protection diode was cooking quite a bit. Serves me right for being lazy and not doing the reverse protection the proper way. Even with only one motor running, the diode was dissipating quite a bit of heat. I can’t imagine in what world this part is rated for 10A continuous current. Maybe it needs a small refrigerator attached.

Anyway I changed the schematics to use a proper P-channel MOSFET and a zener.

I added a small cooling pad on the PCB to help the transistor cool off. Hopefully this will not overheat with full 10A load.

I also decided to test one of the last remaining circuits on the board – the servo connectors. This proved to be quite the challenge. There was a serious contention for Timer #7 on the micro controller.

First Marlin’s temperature control was set to use Timer 7. This was not making the Servo module happy. I moved the temperature module to use Timer 8. Then I found that the SoftwareSerial code was also trying to hijack Timer 7. Moved that to Timer 12.

Finally the servo was working properly. I was able to set the position with the M280 command. I decided to quit while I was ahead.

I was feeling elated by my success with the FYSETC mini 12864 panel and I tried my old “REPRAP Discount Graphics” panel. I thought “surely this should work as well it’s the same SPI graphics LCD after all”.

We you guessed it – work it did not. I tried software SPI, hardware SPI, nothing. Looks like I had to read the manual. Shame!!!

Here is what I found. The old “discount graphics lcd” is not quite the same chip. It uses ST7920 controller, which is a supreme oddball. It uses some very strange scheme and transfers data 4 bits at a time.

Then I remembered I had added support for hardware SPI for that chip since PrntrBoard V1. Why was it not working?

Well, it was because for some strange reason the data pins on the panel are not connected to the SPI interface on the EXP2 connector, so the u8g library has to use software SPI emulation and I didn’t add support for that.

So fixed that, now I have both hardware support and software emulation for the st7920 driver and here it is working: 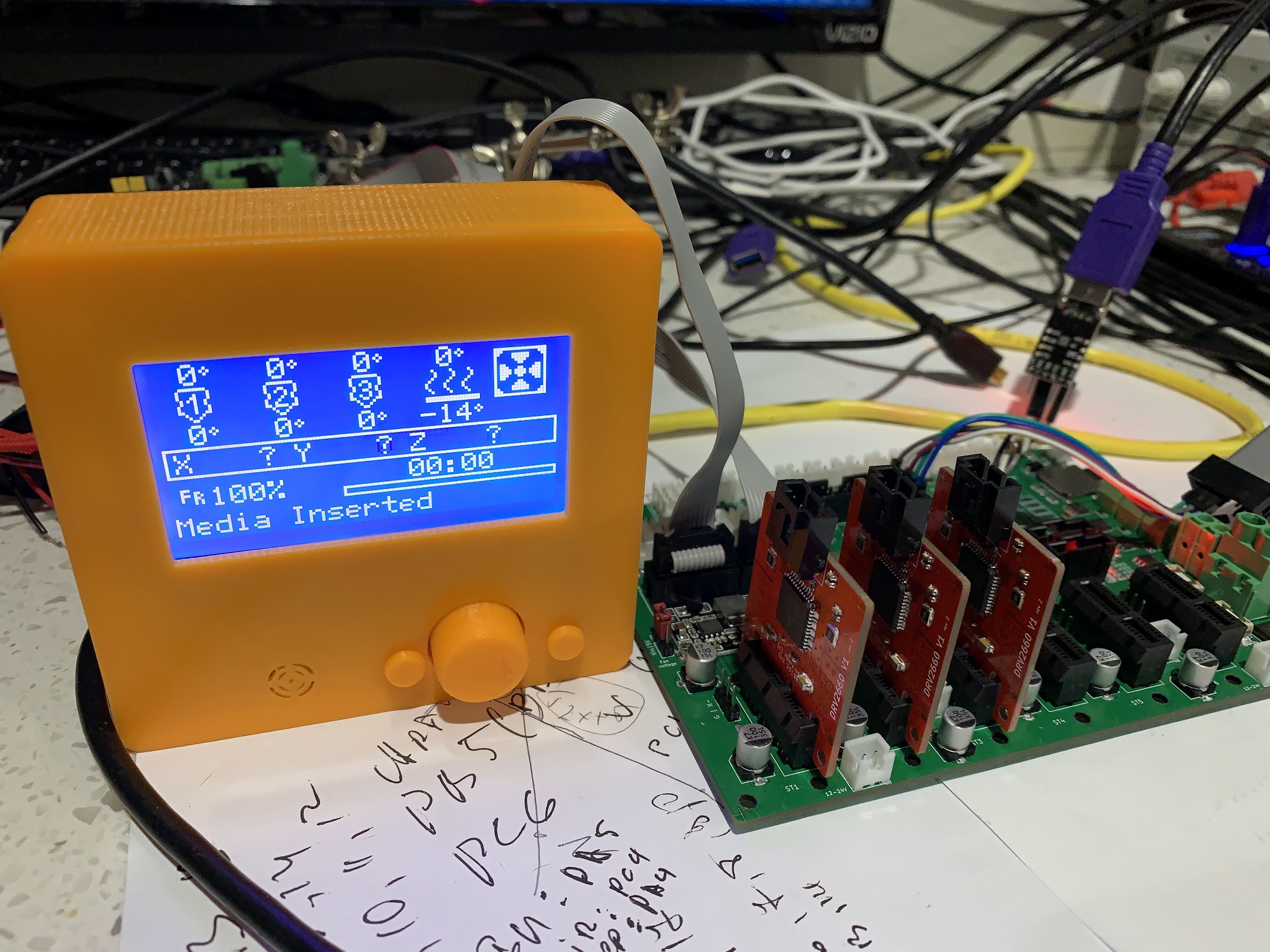 Next I’m waiting on some 2004 LCD screens to arrive. These should be easier, since there is no hardware protocol involved.

First my woes with the TMC2209 driver boards are ongoing. The company making the PCBs called that they could not complete my last two prototype designs. The issue was that I didn’t pay attention to the fabrication capabilities and used the wrong design rules.

Long story short I had to re-wire part of the board to meet their spec and submit another order. Alas that meant I have to wait another two weeks for the boards to appear 🙁

In the mean time I was trying to test what I can with the rev1 prototype I had. I tested the heaters and thermistors are working. Now it was turn to my old nemesis – the LCD panel.

The software for these LCD panels is remarkably convoluted and not at all supported on STM32 series of MCUs. I had to write two more drivers for the U8G library, but finally some good progress:

I got the FYSETC mini 12864 panel to work. To finish the week, I also verified the SD-card interface is working.

Here is a link to the github project with all the board design files. The Marlin firmware I’m using.

QFN packages and I could not get on the same page. I made one prototype of the V1 design with TMC2209 drivers and only 3 out of 5 worked. I had to re-solder them 3 times just to get them to talk to the CPU. I was just thinking these are just hard on my aging hands and eyes.

I found countless YouTube videos of people soldering chips with QFN packages and it all seems so effortless. I thought I just suck at this.

Yesterday I made some driver board for the V2 design with the 2209 drivers and again had to re-solder the chips, followed the YouTube guides and no luck. Two would move the motors in very strange way and consume quite a bit of power and one plain would not move.

Here is one of the dreaded beasts I was ready to give up, when I decided to check the driver datasheet for the recommended PCB land pattern. I thought maybe I’m missing something.

For background I downloaded a KiCAD footprint from somewhere and foolishly assumed since it was for Trinamic drivers, it should be correct. Oh well, lesson learned.

Turns out this chip has oversized exposure pad. It is so big that it would touch the pads for the pins on the PCB. It is very likely some of the pins on my board are just shorted to the ground via the die pad underneath.

This is the chip footprint I downloaded: 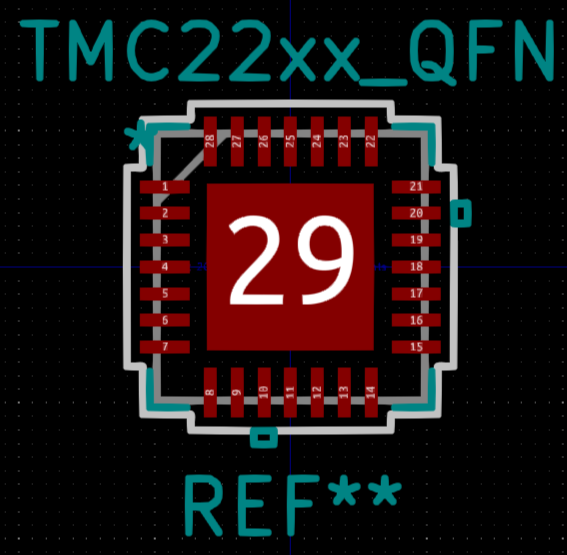 Looks pretty normal, except the center pad (29) is 3x3mm size. According to the TMC2209 datasheet, the pad on their chip is 3.7×3.7 mm size. Look what happens when I update the center pad size to match the datasheet: 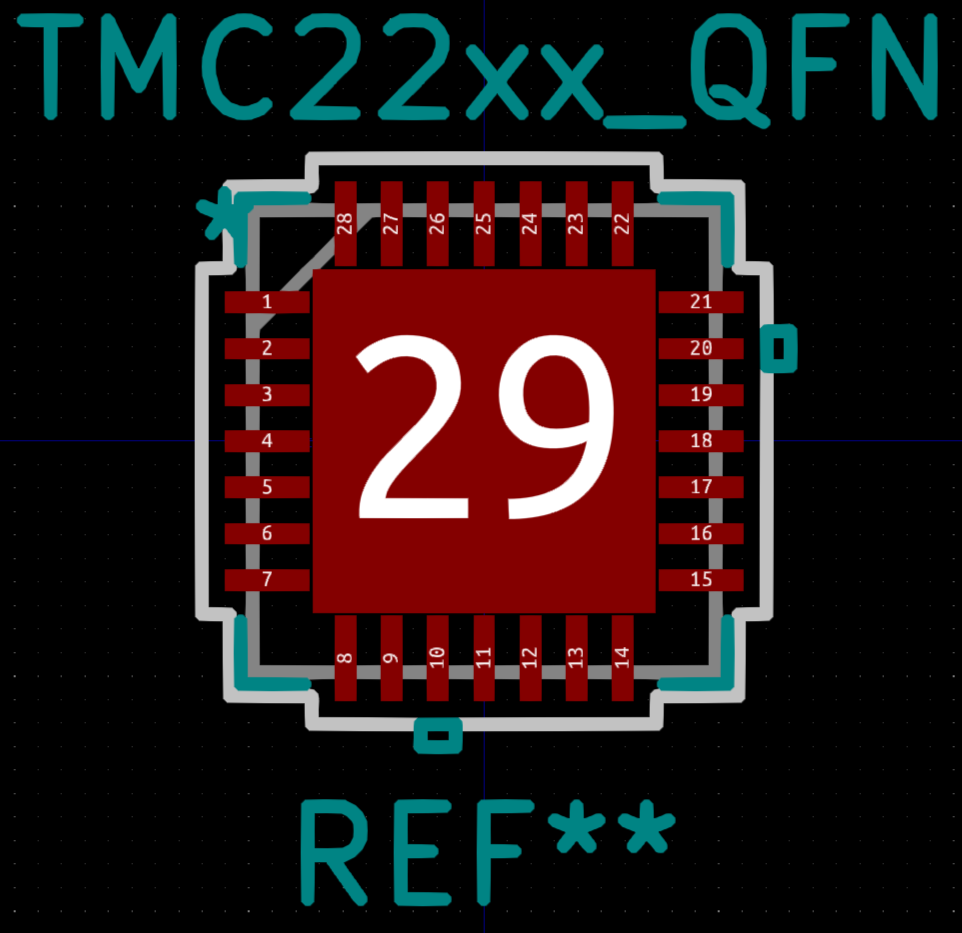 The pin pads are almost connected to the center pad. I resized the pins to match the spec and this is the result 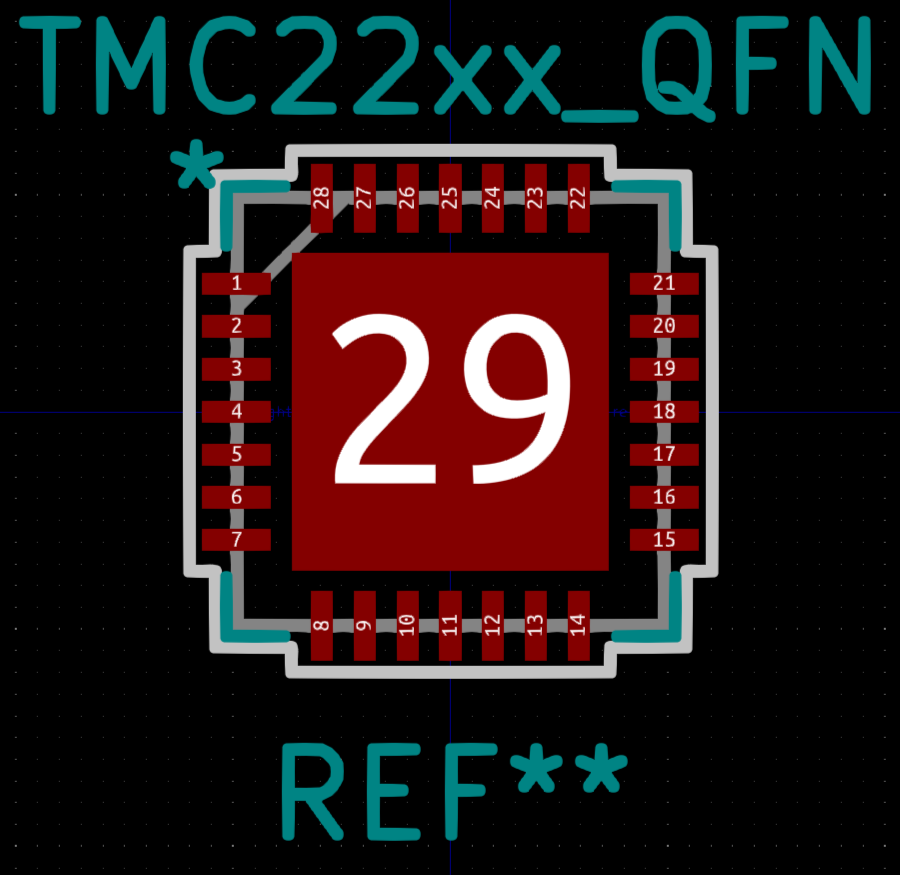 I ordered a new set of driver boards with the fixed footprint.