I did some simple thermal tests on the TMC2209 board. In theory these driver chips can supply up to 2A RMS current to the motors. Silent StepSticks with the same drivers are rated around 1.2 to 1.4A depending on the manufacturer.

I used all passive cooling. Ambient temperature was 25C. I used a small 9x9x12mm heatsink on top of the driver chip. These are commonly used on the TMC2209 StepStick boards from China (FYSETC or BIGTREETECH). These are not great, but that is what I could fit in the space. I’ll try to move some of the capacitors to make space for a larger heatsink. 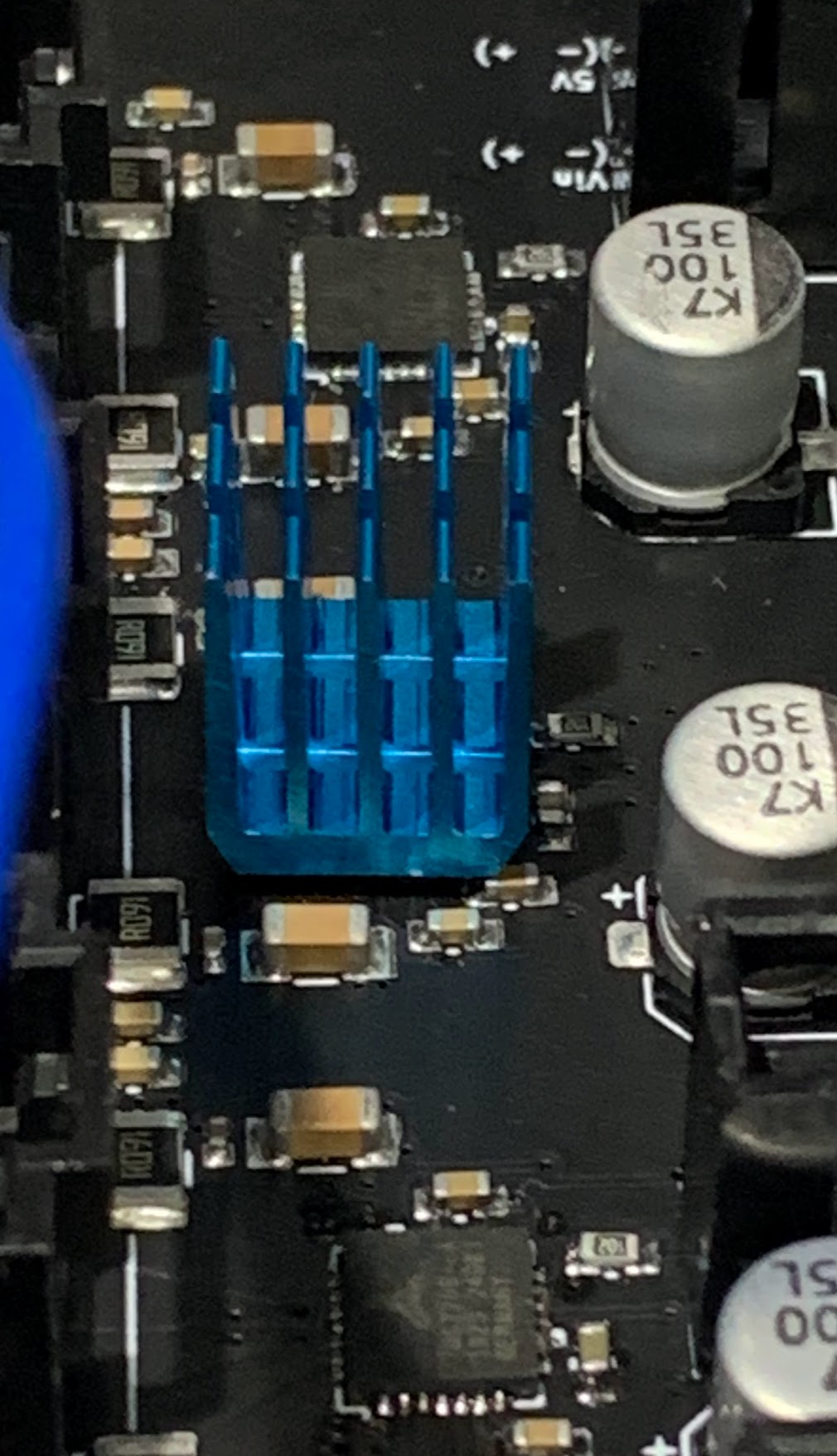 On the bottom I used a 20x14x6 heatsink. Not ideal, but that is what I had laying around. There is enough space for a much larger one (25x25x8 for example). 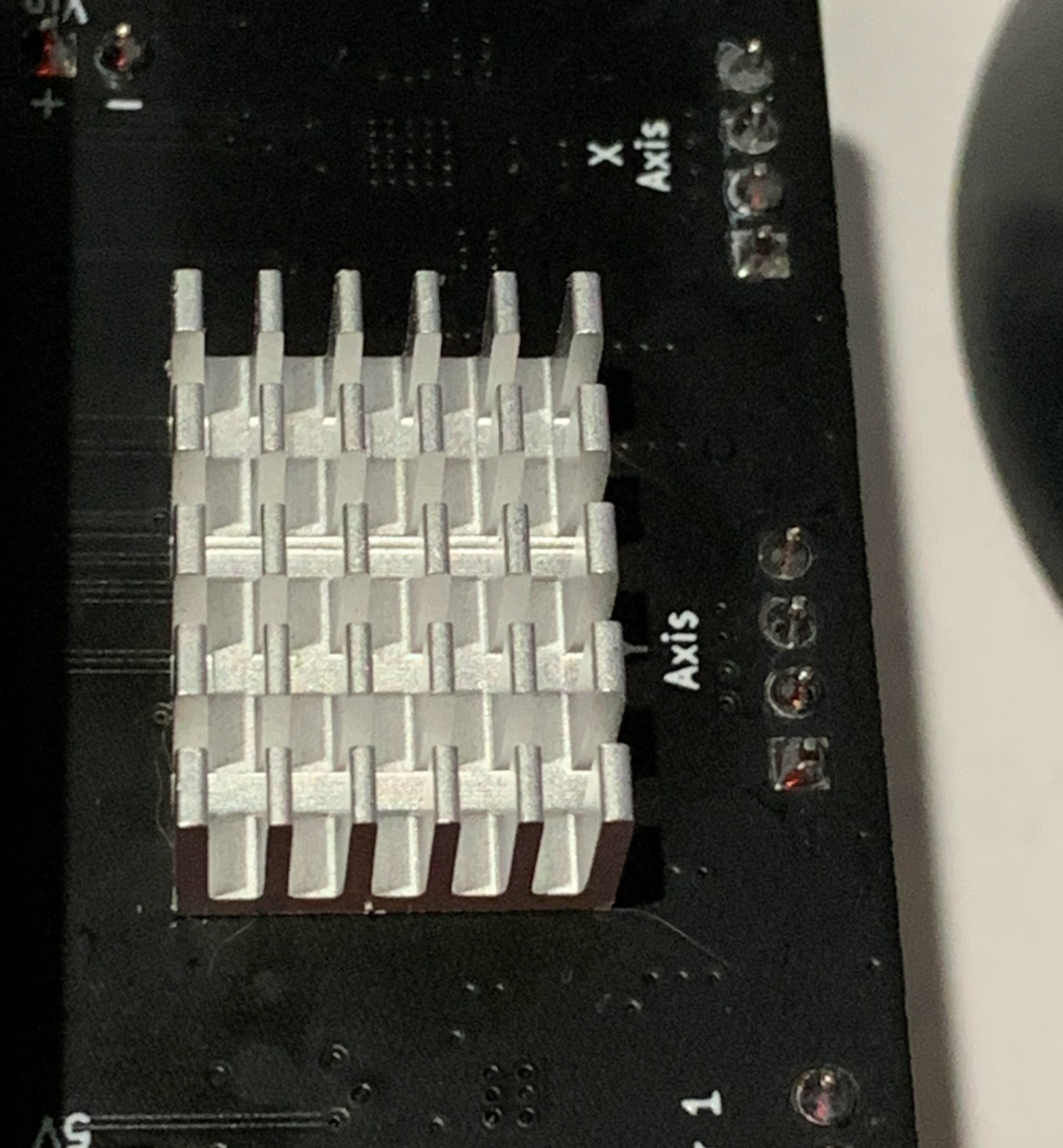 I used a Seek thermal camera “mounted” on a small microscope stand and connected to my old Nexus 5X phone. 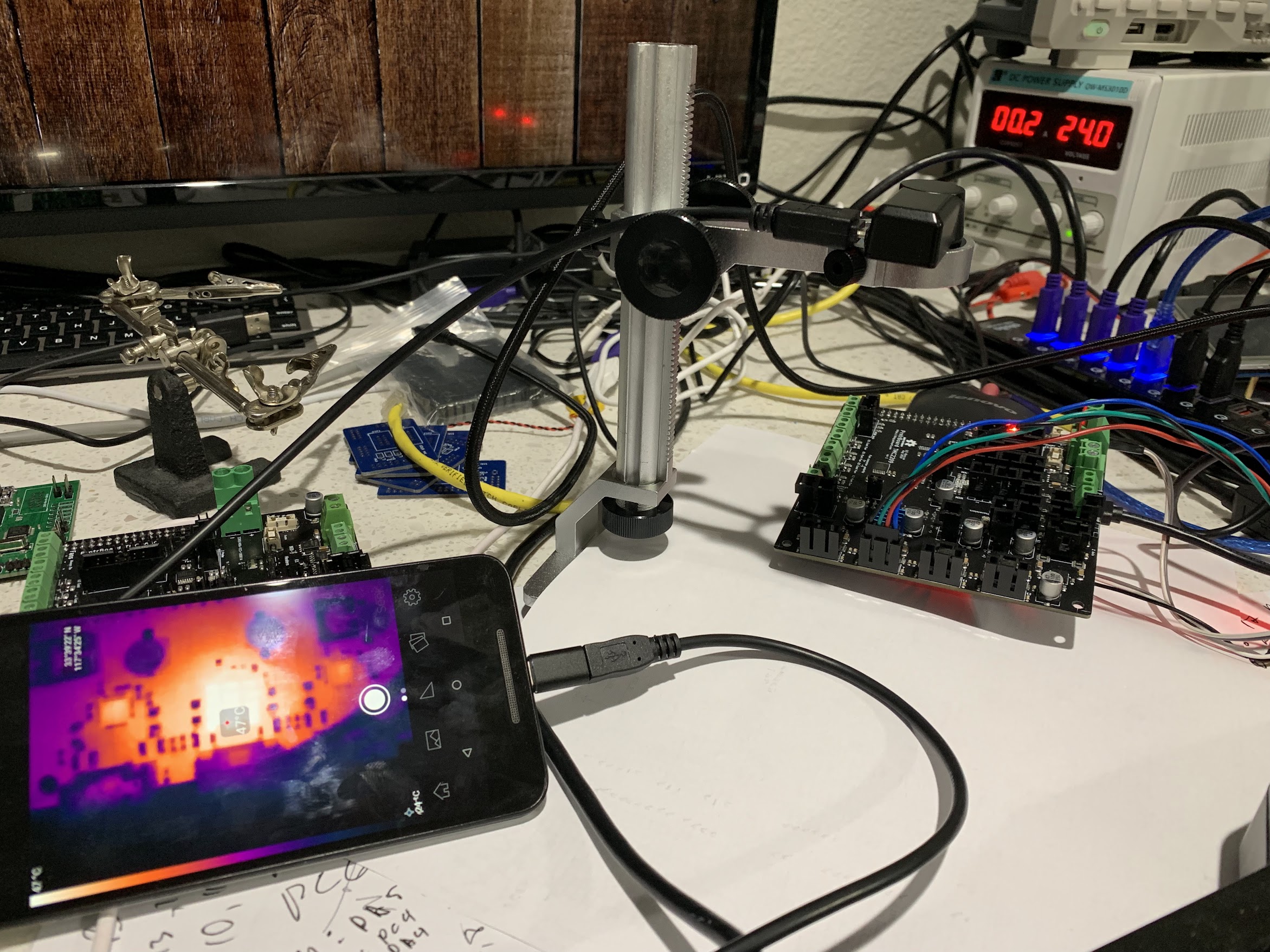 After about 20 minutes it board heated to about 47C on the top: 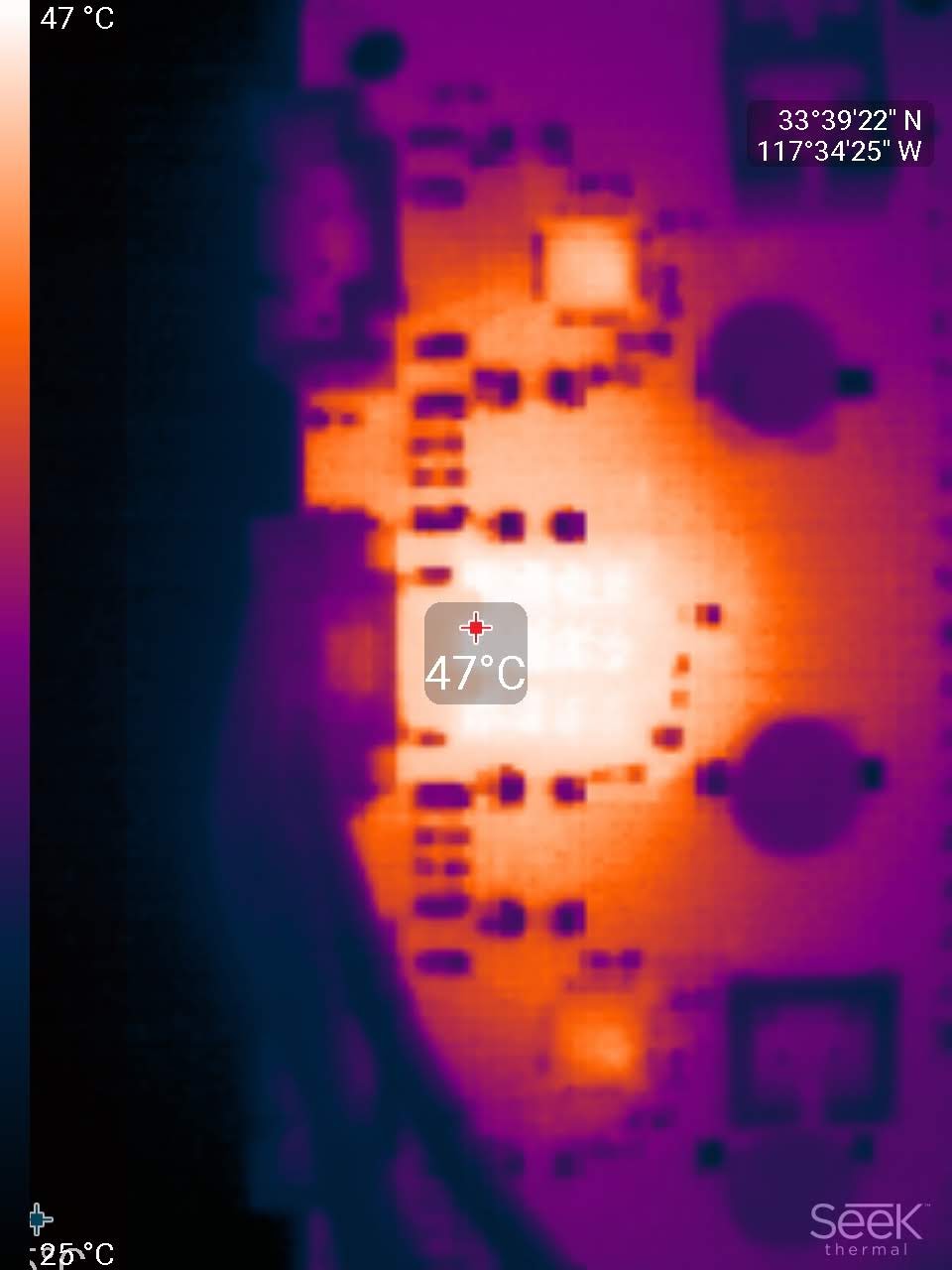 The heatsink was barely warm to the touch. In my experiments the top of the drivers always heats up more than the bottom, probably because of the relatively large thermal mass of the PCB itself.

Next I ran the board at 1.4A RMS. This was more challenging test for the heat dissipation. It took a while for the temperature to stop rising. It stabilized at around 64C on the top: 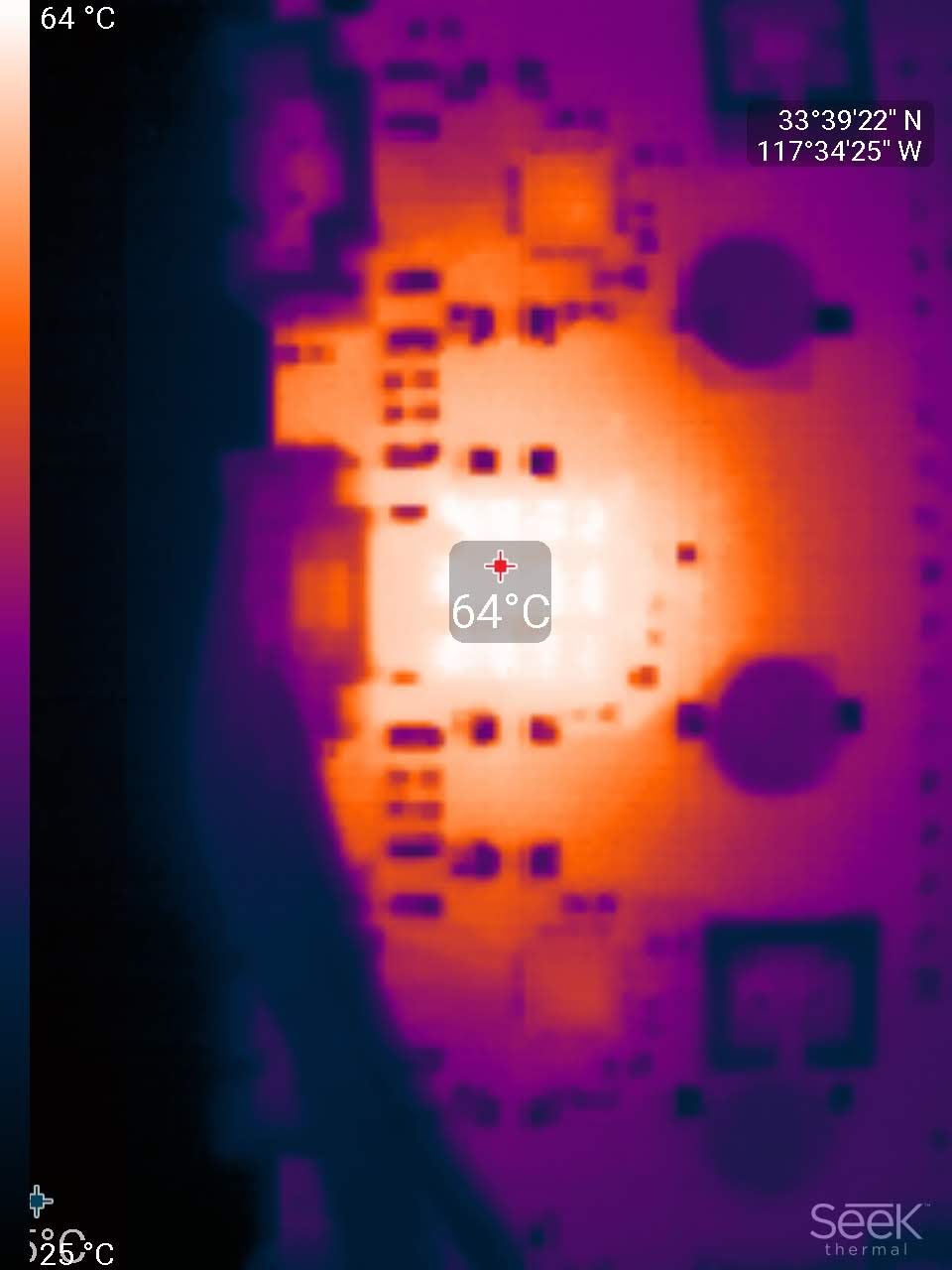 And around 55C on the bottom: 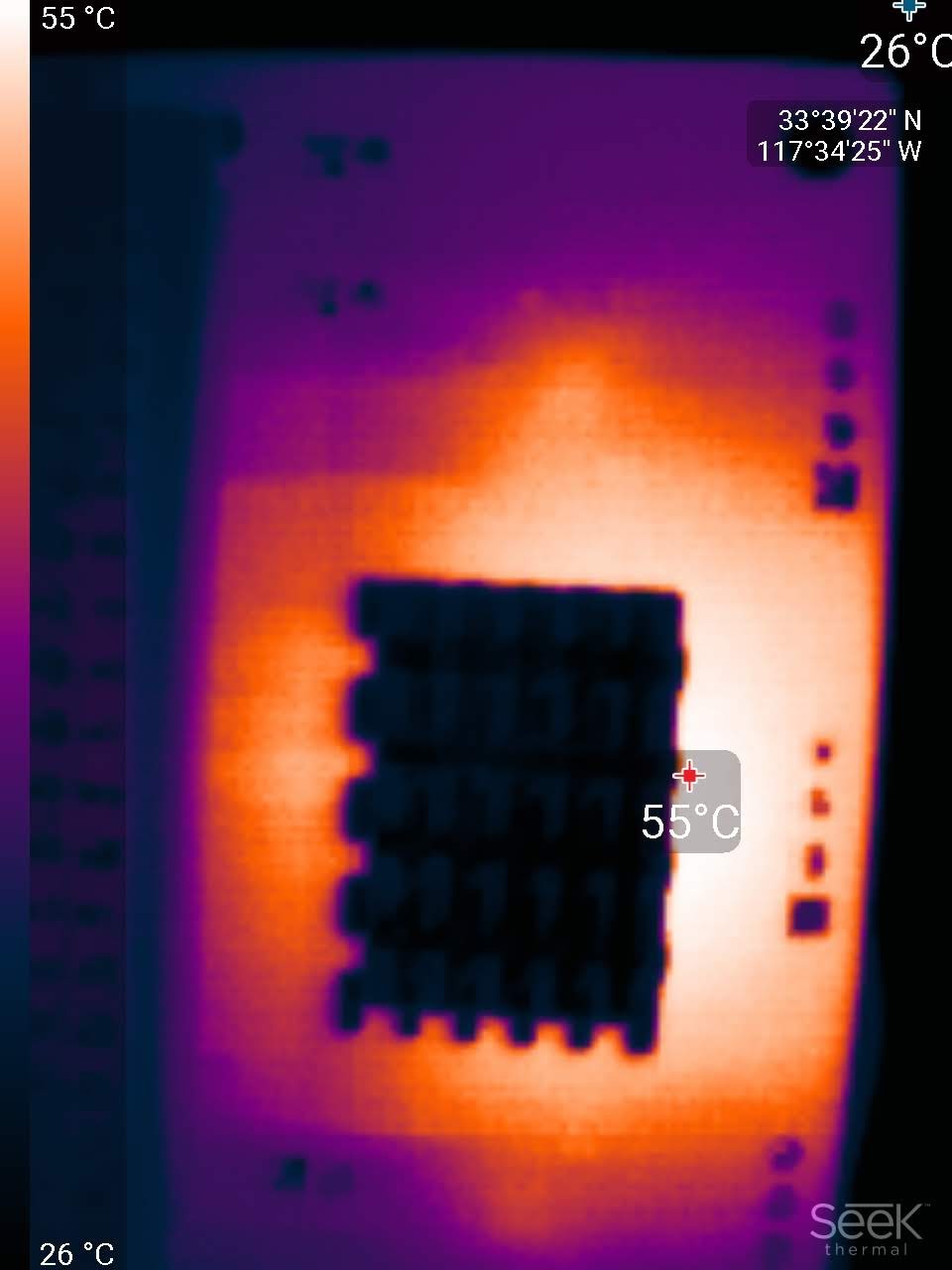 In the picture the heatsink looks “cool” because the camera can not compensate for the different emissivity of the bare aluminum.

Both top and bottom heatsinks were considerably hot to the touch. Not “burn your fingers” hot, but “I cant keep my fingers longer that 5 seconds” type of hot.

In both cases I did not get any over-temperature warnings from Marlin. I would say 1.4A is the limit on convection heat dissipation of this board in this configuration.

The Seek camera has around +/ – 5C accuracy.

I did one last test at 1.8A RMS. This was on the extreme side of the capabilities of the board. The temperature of the driver kept climbing slowly. Once it reached around 75C on the top I got an overheat alarm in Marlin, so I turned the power off.

I’m confident with some active cooling the driver would be able to run at this setting, because it took quite some time to get to the alarm.