For a while now I had this idea – create a small board which controls the extruder heaters and fans.

Why – you ask? Well hear my theory. I have this old printer – the RigidBot. It has dual extruder – all direct drive. However I noticed that when it starts to work my temperature readings become very noisy.

Initially I was puzzled, why the noise. After some investigation I noticed that the noise is present only after the printer motors are on. If I switch the motors off (via G-code command) the temperature line in OctoPrint becomes smooth again. It turns out the motor current is creating EMF interference with the thermisor wire.

So I was thinking instead of routing all these wires back and forth, I can build a small board with a cheap CPU that controls the temperature. I can also outsource the control of the cooling fans and even add local display etc.

All the wires needed would be power and some way to communicate between the main board and the extruder daughter board. Audio cables are relatively cheap and well shielded – I can use one for I2C or Serial communication.

In a dual extruder setup one can save quite a bit of wires: two pairs of power wires for the heaters, two pairs for the thermistors, another two pairs for the extruder fans and one or two pairs for parts cooling fans. All these could be replaced with one pair for power and an audio cable for communication – the rest of the wires are all local to the board. Well one has to mount the board somewhere close to the hotends.

Long story short, the first version of the board was not a grand success. The power supply was very noisy and the temperature readings from the ADC were so unreliable, that it was throwing the PID into a weird loop.

Here is the second installment of the board. The power is now dual stage – a buck converter to 5V and then LDO to 3.3V for the micro controller. The LDO filters the noise from the buck converter. 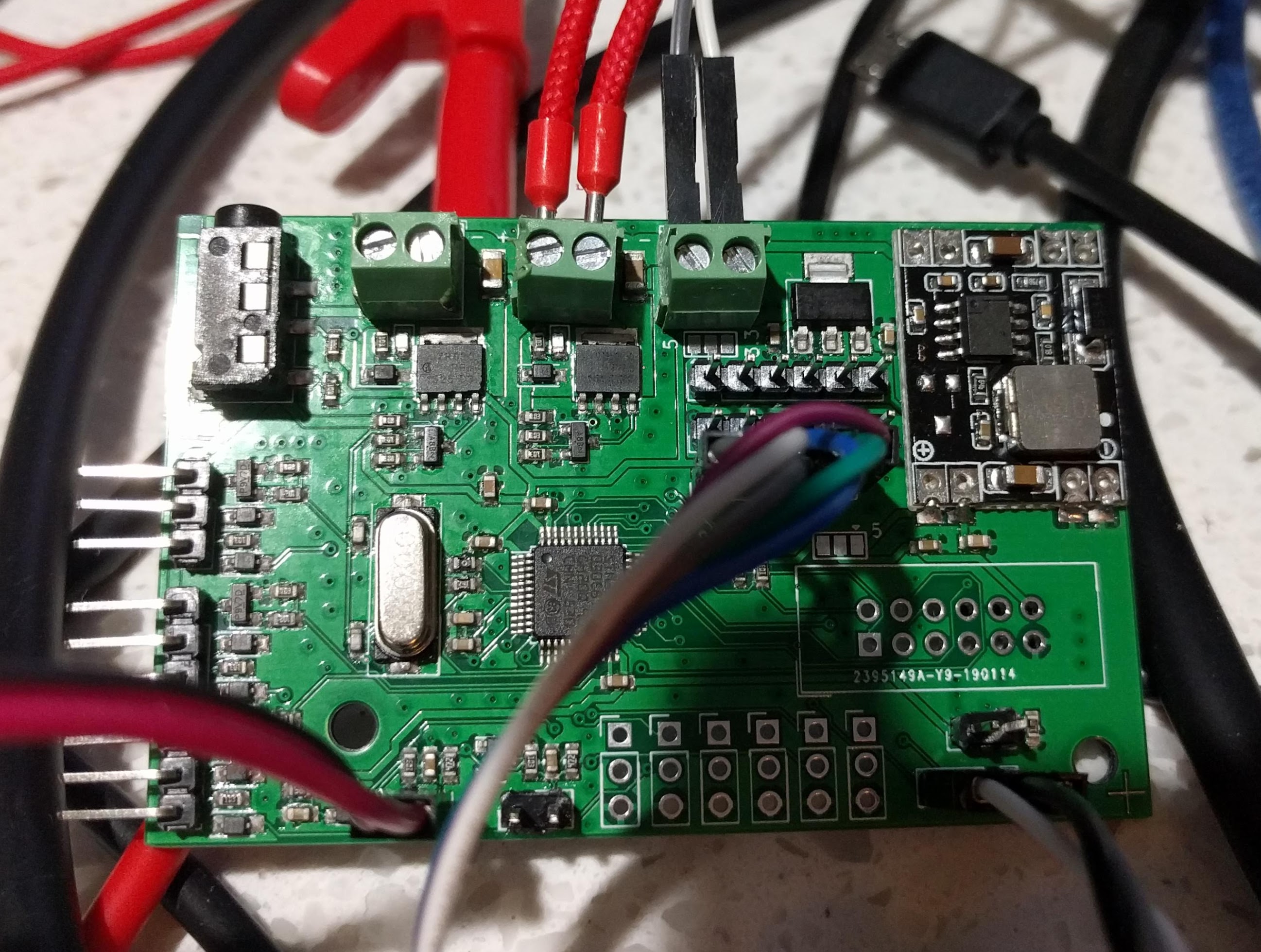 The brain is STM32F030 micro controller. There are 3 fan connectors with tachometer inputs, so in theory the board can alarm if the fan stops working, just like the Prusa MK3. There are 2 thermistor inputs, 2 heater MOSFETS as well as 2 thermocouple controller inputs – for MAX31855 or MAX31865 or similar.

In the next version the voltage the fans would be select-able to whatever the input is (12V or 24V) or 5V. There is a bunch of unpopulated extension pins and an LCD connector for extra fanciness.

I was testing the PID in Arduino code and it works quite well this time.

Just for fun I decided to try my thermal camera to see if there are any hot spots. The picture is with the heater 1 working. 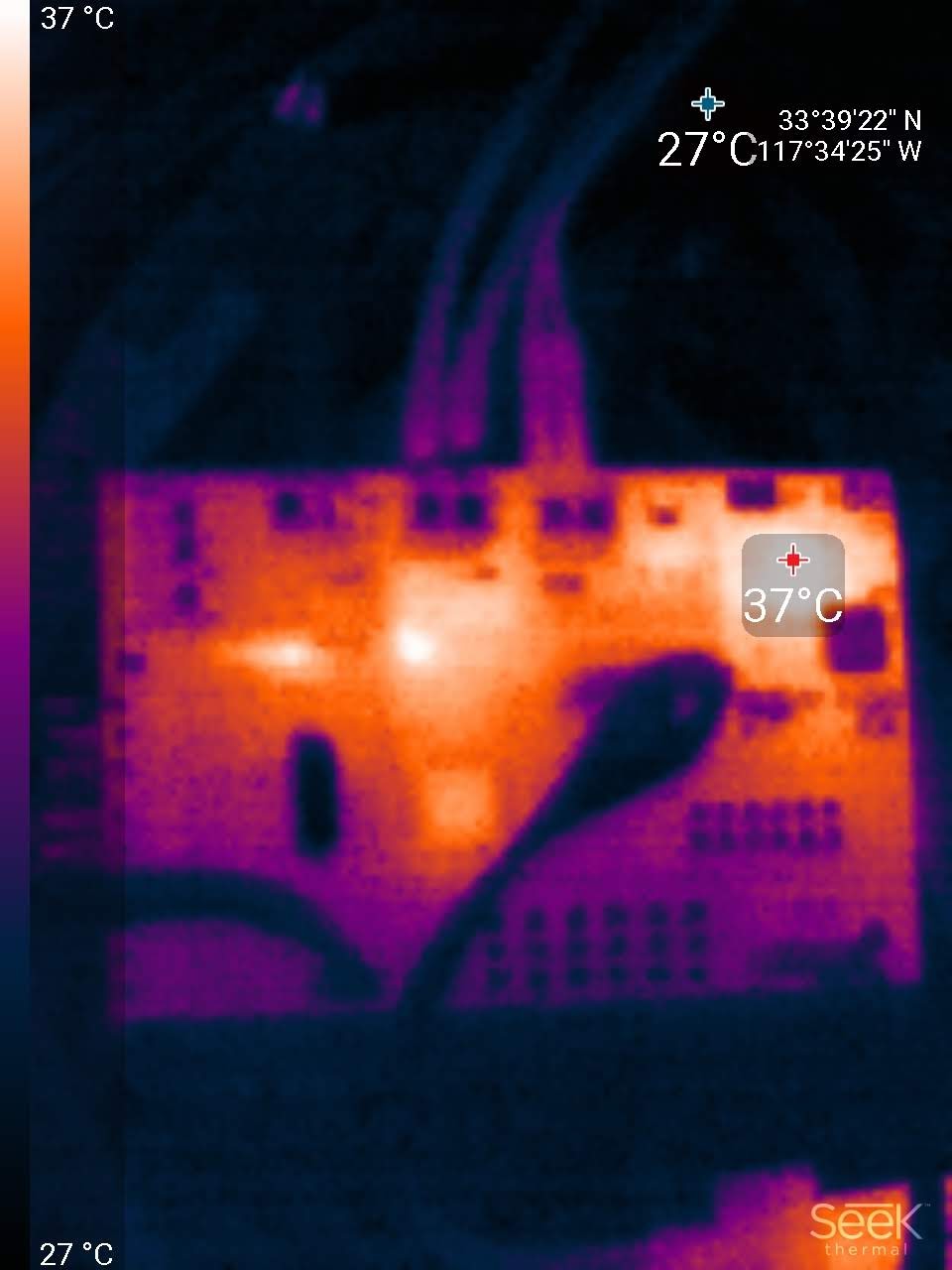 No surprises, the heater MOSFET is a bit warm. The hottest spot is on the buck converter – 37C. Don’t be alarmed by the bright colors 37C is barely warm to the touch.

I’m still trying to figure out what should I use as software platform. Arduino is simple, but somewhat limiting. The STM32 CumeMX is another option. There is MBed and FreeRTOS options if I want to try multi tasking. Oh decisions, decisions.

I dusted off my trusty pick and place and made one of the newly received TMC2660 driver boards.

Since it’s the first time I test this setup I populated only one of the driver chips – the X axis.

Alas it was all in vain. After fighting with it for several days, the motor would not spin properly. Either my stepper driver configuration so completely busted (although I double and triple checked) or the driver chip is fried. One of the phases works, but the other sends no current to the stepper motor.

Also I was trying to fit some automotive fuses on the board – you know for protection. Alas the fuse holders I ordered are very flimsy and don’t fit the fuses at all. Ordered a different set, but have to wait.