The long weekend was a perfect time to take some vacation days and work on my projects. Alas the past few days have been nothing but failure after failure. Ahh, let’s make lemonade.

So I started very optimistic – my 3D printer controller board was basically working, and feeling bold I went on “improving” the puny 3D printed (Duplicator I3 mini) that I purchased for this experiment.

For some time I’ve been wanting to add dual extruder support to my printers. The ability to print with PVA support, dual colors – oooh the possibilities. However my previous experience was that such endeavor is feeble at best.

Two and a half years ago I assembled a MendelMax printer with dual extruders and it was not very successful. The design used dual E3D V6 hotends – these were all the rage back then. Unfortunately there was no easy way to level the two extruder heads, so what you end up is one head printing correctly and the other was printing in the air. Even if you get them somewhat leveled one head would print and the other would scrape the filament from the bed. Add to that the head was now super heavy from two sets of steppers and assorted hardware.

Since that experiment I wanted to try a Bowden extruder setup – mainly to reduce the weight of a dual extruder setup. I also was fascinated by the E3D’s Cyclops/Chimera designs and wanted to try one. It seemed like a design that would solve some of the issues I had encountered with the MendelMax setup.

I procured parts for the cyclops/chimera setup some time ago from China, but I was suspicious why this has not become popular setup. Since the E3D designs are open, various suppliers are offering reduced price version of the kit for some time – yet it has not taken the world by storm.

In unrelated observation, I was very impressed by the Wade’s extruder design used in the Lulzbot mini. The geared setup provided so much torque – the extruder would practically push filament cold out of the nozzle – well not really, but close.

Anyhow I got the parts for the hotend, now I needed two extruders and lucky for me E3D came up with the Titan extruder. It was geared 3:1, not too bit as Wade’s masterpiece and affordable, thanks to the people of China.

To drive filament trough the extruders I opted for 2 pancake steppers with 0.9 degree precision from the E3D web site. On paper these were perfect – increase precision, low weight and as added bonus they had 6 pin plug for a  cable of my choosing, instead of the usual pigtails. 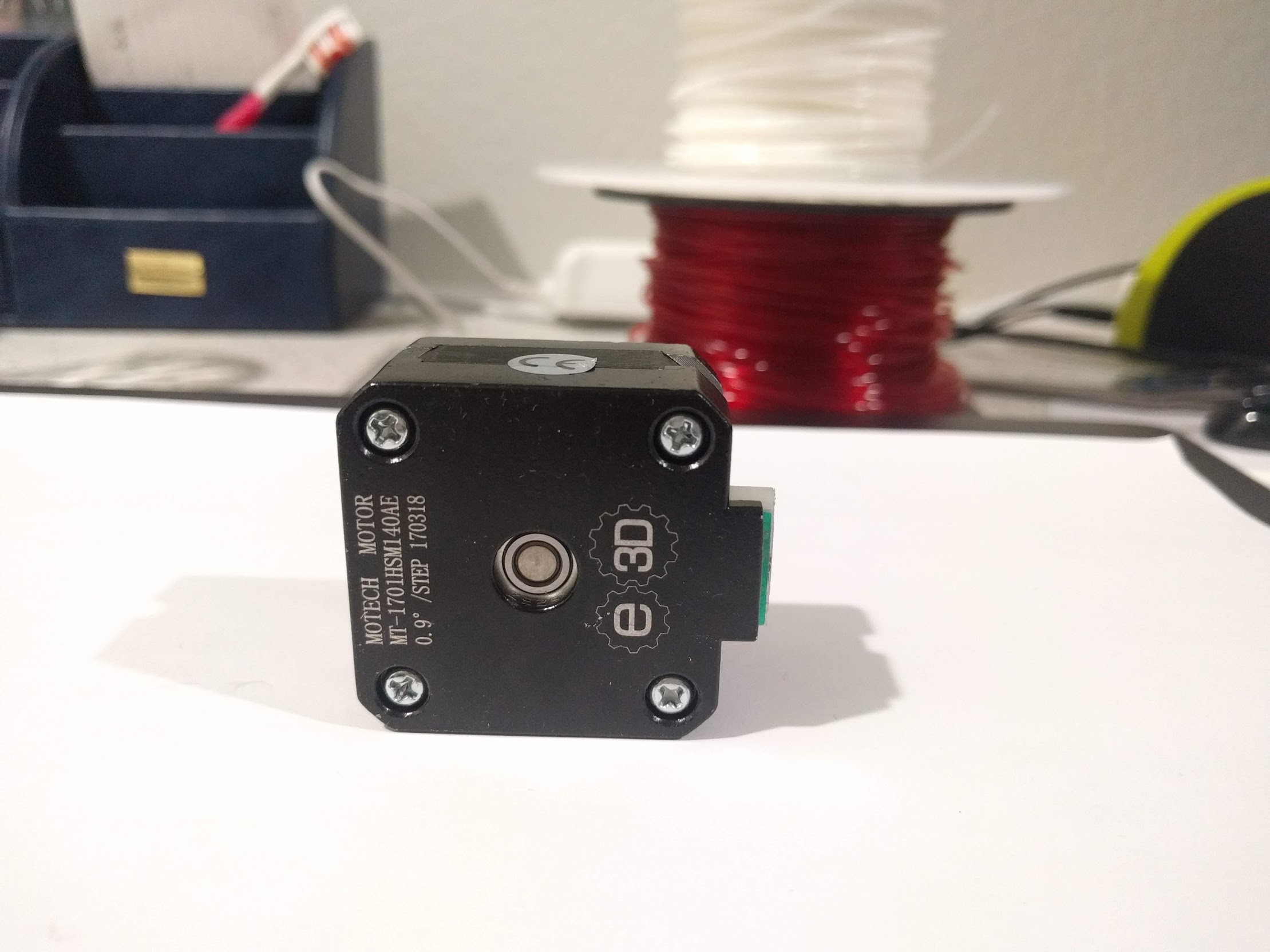 All this prep work done, rewind to yesterday where I was going to put it all together. What could possibly go wrong – well everything and more.

First I designed a mount for the cyclops/chimera hotend for the Duplicator I3 Mini. Took a few hours, but I was very happy with it. As added bonus I put a mount for a bed leveling probe. 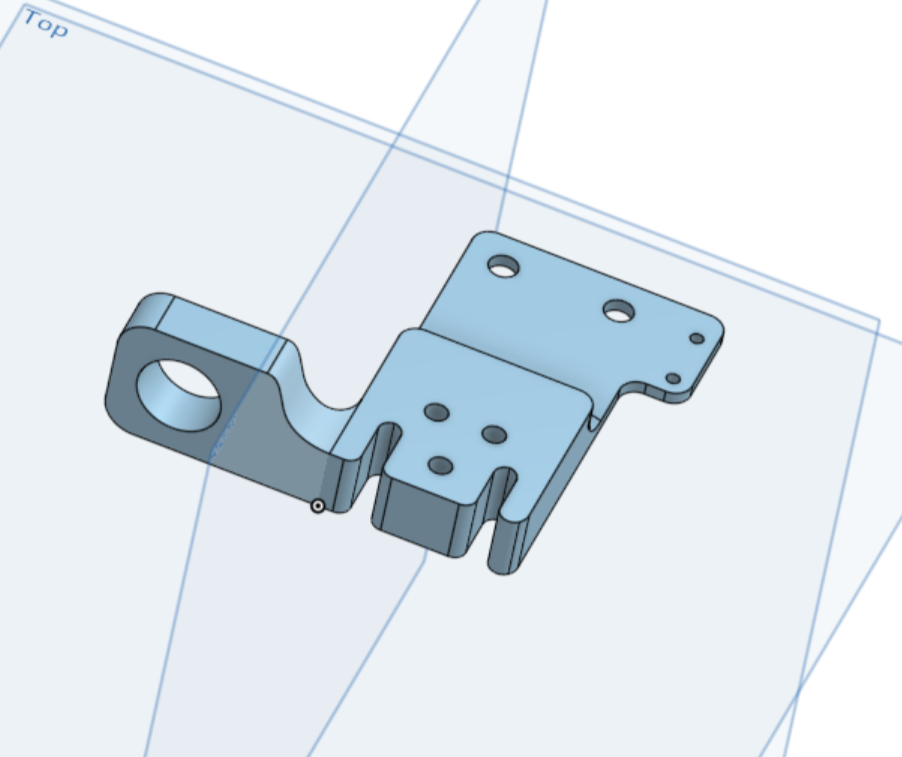 It was looking very cool when mounted on the printer. 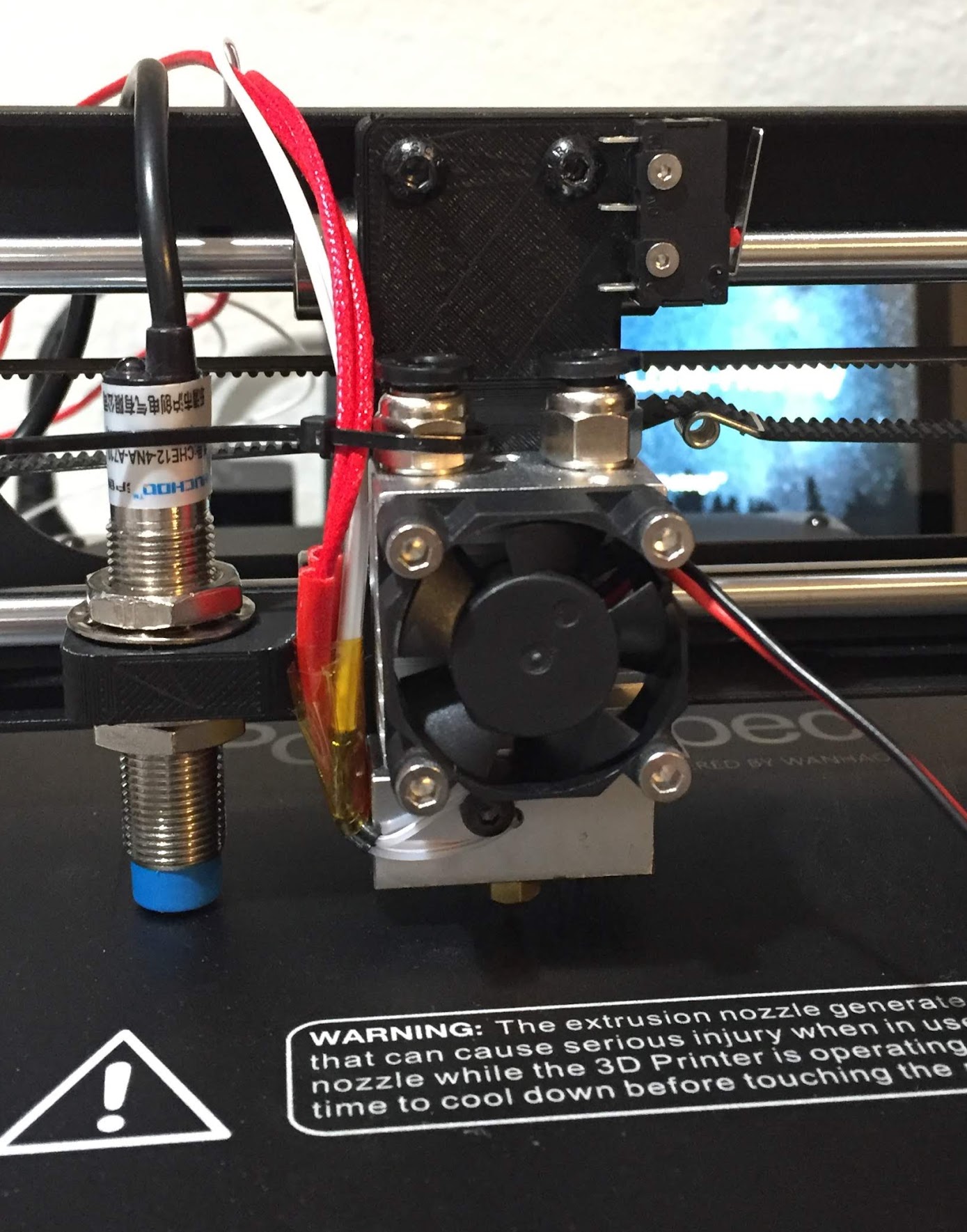 Here I tested the bed level probe and the endstop homing the X axis correctly. Unfortunately the bed level probe did not work out of the box. I tried to use an optron to decouple the probe high voltage output from the sensor input on the controller, but the optron was not pulling enough current to produce a level change on my board. I gave up on the bed level probe for now. I’ll have to design an adapted of some sort for it. 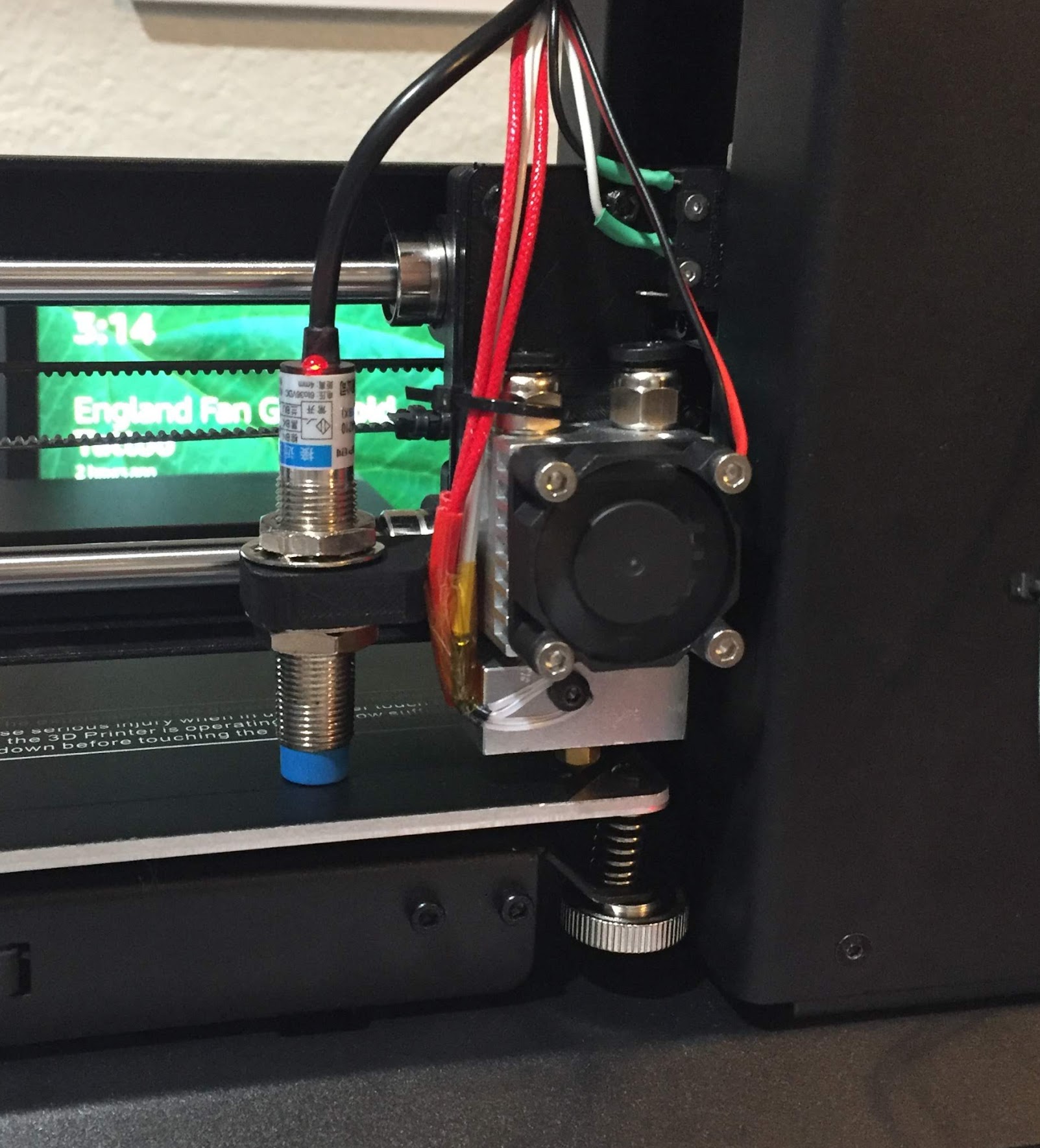 Then I designed a spool stand and a bracket to mount the Titan extruder, because it would not fit on the small printer body. 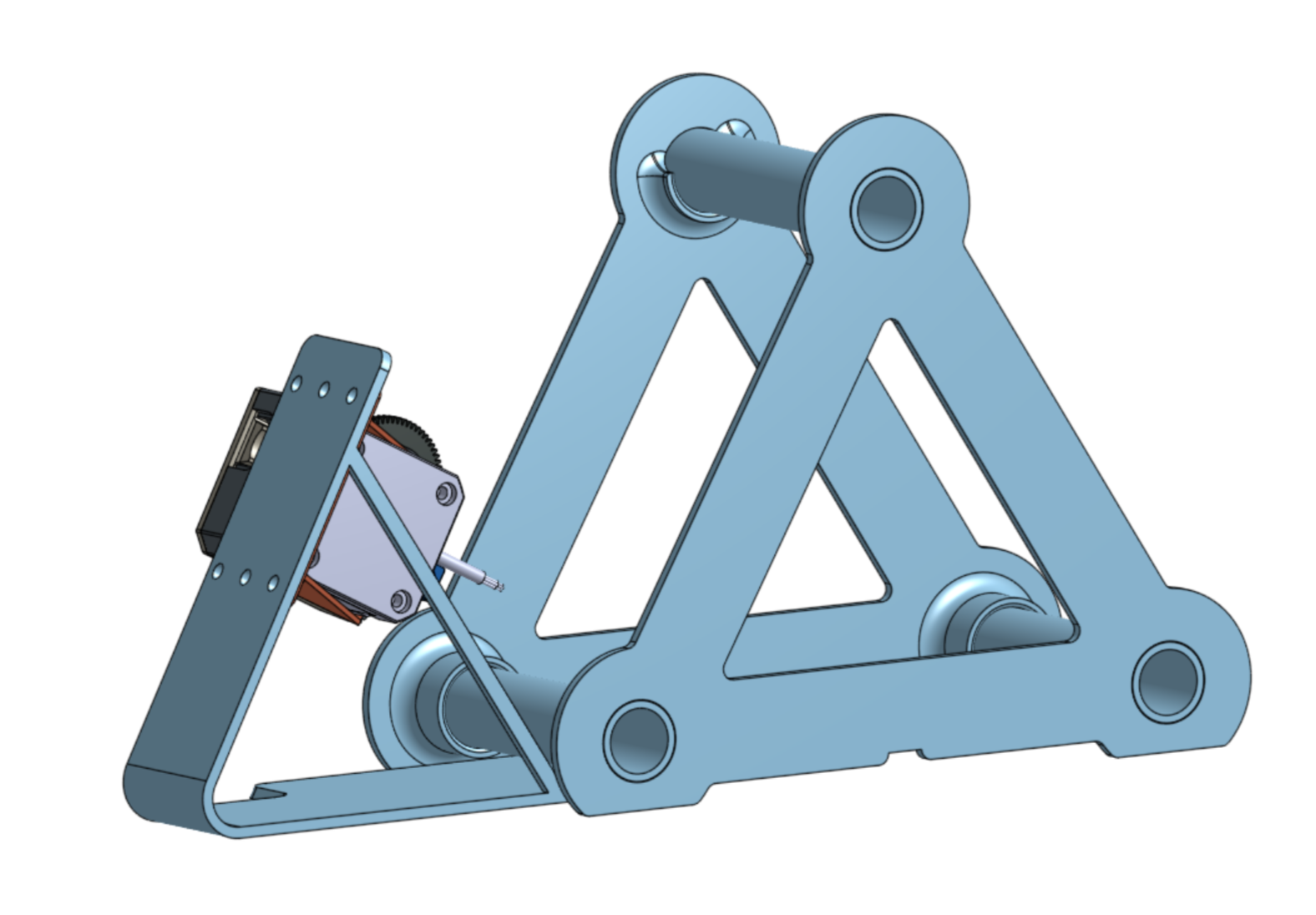 Again it was looking good. The picture is of an earlier design, without the support beam. I added it because the bracket was wobbling too much. 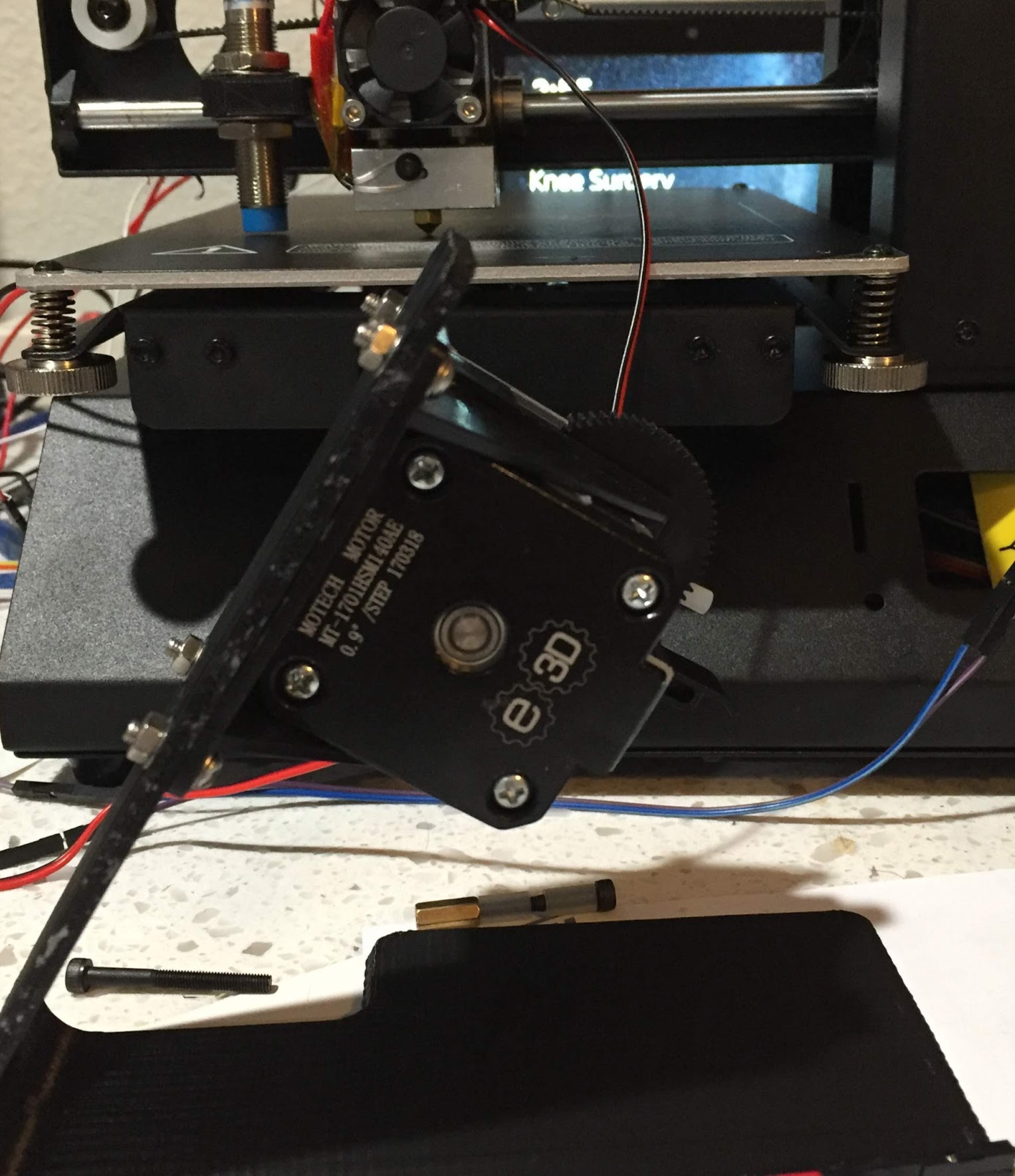 Then I tried to hook the extruder to the 3D printer controller and it was not working. Try as I might to increase the current – nope. It would buzz and wobble, but not spin. I dismantled the whole thing and left the motor alone – it was spinning, but in weird directions – it would change direction on it’s own. I thought the controller was busted or the motor was possessed.

Long story short it was the motor cable. Remember I was so excited that the motor had this plug, instead of cables running out of it. 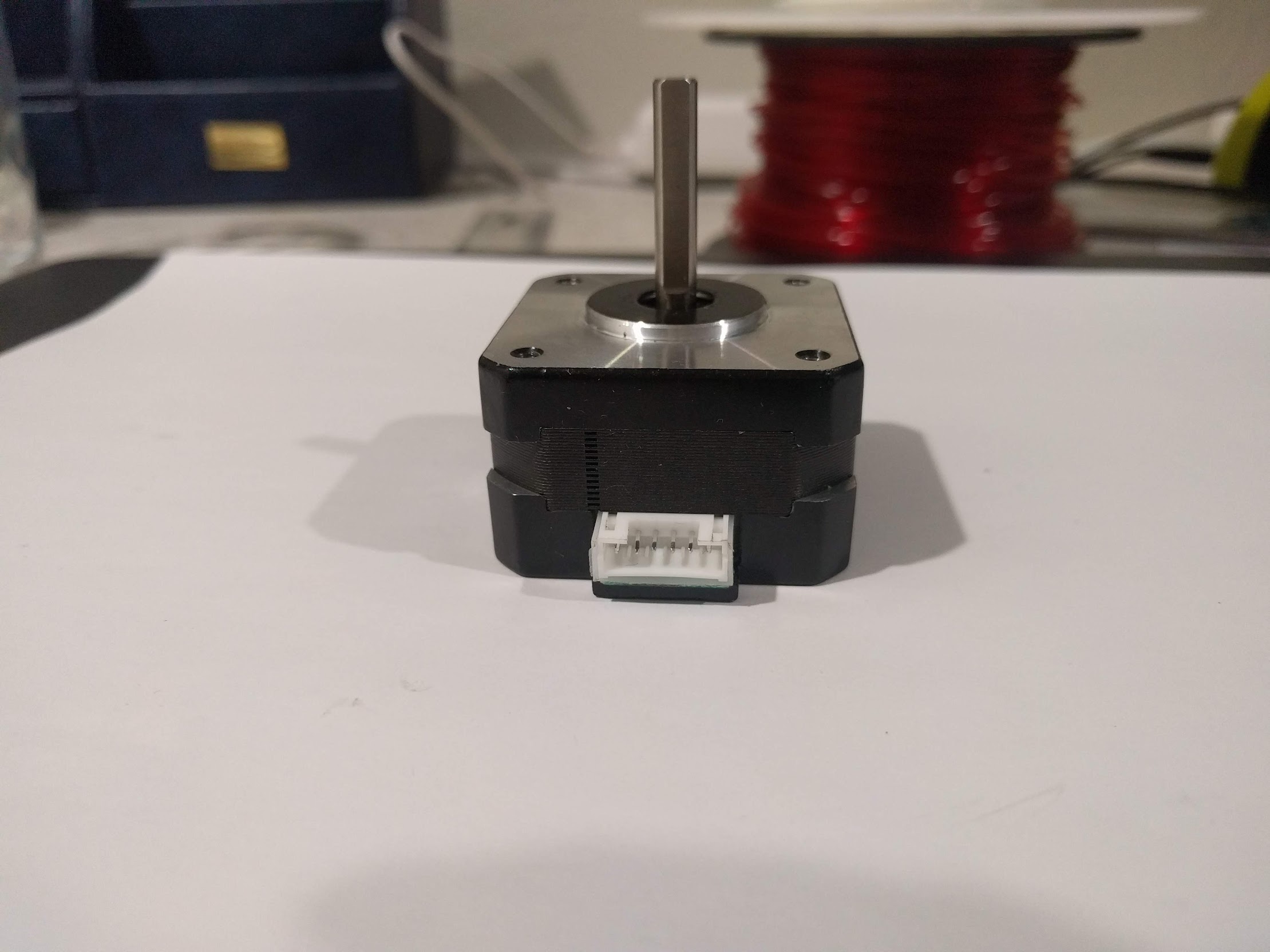 Instead of splicing cables around you can just buy a cable with the length you need and plug it in the motor and the controller. Well sounds cool, except there is a trick to the cable and not all cables are created equal.

Now the connector on the controller board takes the signals in this order: A, !A, B, !B and usually the cables I got are kind enough to swap signals from pins 3 and 4, so the board receives the signals correctly. You can see where this is going. I was unlucky enough to get a straight cable so the signals were not in the right order when the motor was connected to the board.

OK lesson learned. Check the motor cable before using it. I fixed the cable and put everything back together. Still no luck.

This time the motor would try to spin but start to skip steps and would not move the extruder. It would move if I help it with my hand, but that was not a workable solution. I cranked the motor current up and it would move the filament up and down the tube, but it was struggling. I let it be and proceeded to hook everything else to the cyclops hotend.

If you are not following the cyclops/chimera is a hotend which has two configurations. The first is called cyclops: two filaments come in a common heated block and come out via single nozzle. I wanted to try that first, because this way I won’t have to level two extruder heads. It was a bit more complicated setup in the firmware, but I thought it was worth it.

Unfortunately my hopes were crushed again by failure. To spare you the details this design has a few flaws. First the filament path is not straight – in a normal extruder the filament goes in a straight line to the nozzle. In the cyclops design the filament has to bend 90 degrees twice – once it enters the heater and once to go trough the nozzle. This in turn requires much more torque from the extruder.

The second design flow is that the molten filament shares a common path between both intake points. It is possible for molten filament to go up and clog the other intake – this happened to me twice before I gave up on the cyclops.

The third problem I has was with the manufacturing of the heated block – it used way too lax tolerances an filament was oozing out from the heat break threads as well as the “plug screw” thread (a screw that is used to plug a hole on the side of the heater block).

So to conclude the cyclops was a fail. I can get it to extrude from one side, but to switch to the other side it required quite a bit of initial torque. Once you get one side going it was working, but to get it extruding was a challenge, and there was the clogging thing. Stay away.

Disheartened by this failure I dismounted the cyclops and decided to try the chimera. This configuration is more straight forward – is looks like two hotends which share a cooling block, which is a space saving design. There is the problem with leveling the two heads against the bed, but this is eased by holding each head with set screws. Not ideal but workable.

Before completing this setup, I gave up on the E3D pancake steppers – they provided too little torque for the extruders to spin reliably. I’m not sure if the motors are bad, the 0.9 degree thing or what is it, but I could hold the motor shaft with my hand and stop it from moving. If they produced any torque it was measure in mosquitoes not ounces per inch. I put two regular 1.8 degree motors I had lying around – these worked much better even with 30% lower current than the pancake motors. 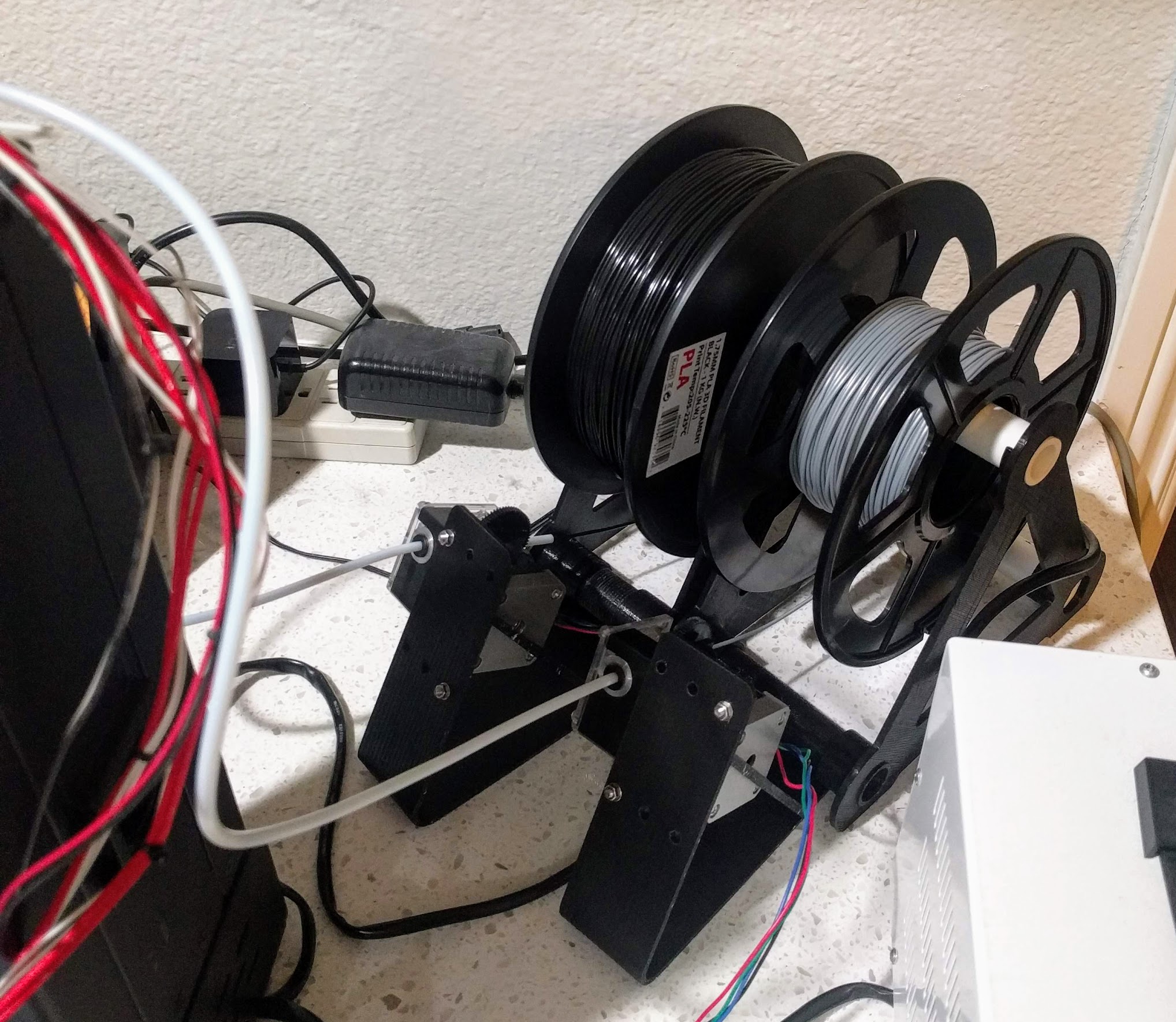 The chimera setup was too plain to leave alone, so I decided to experiment with another innovation from China – the combined nozzle/heatbreak.

Again on paper it sounded intriguing. Instead of having a nozzle and a heat break tube – both meeting in the heater block. This all in one design would simplify the system. No more careful torquing of the nozzle required. Or so I thought. 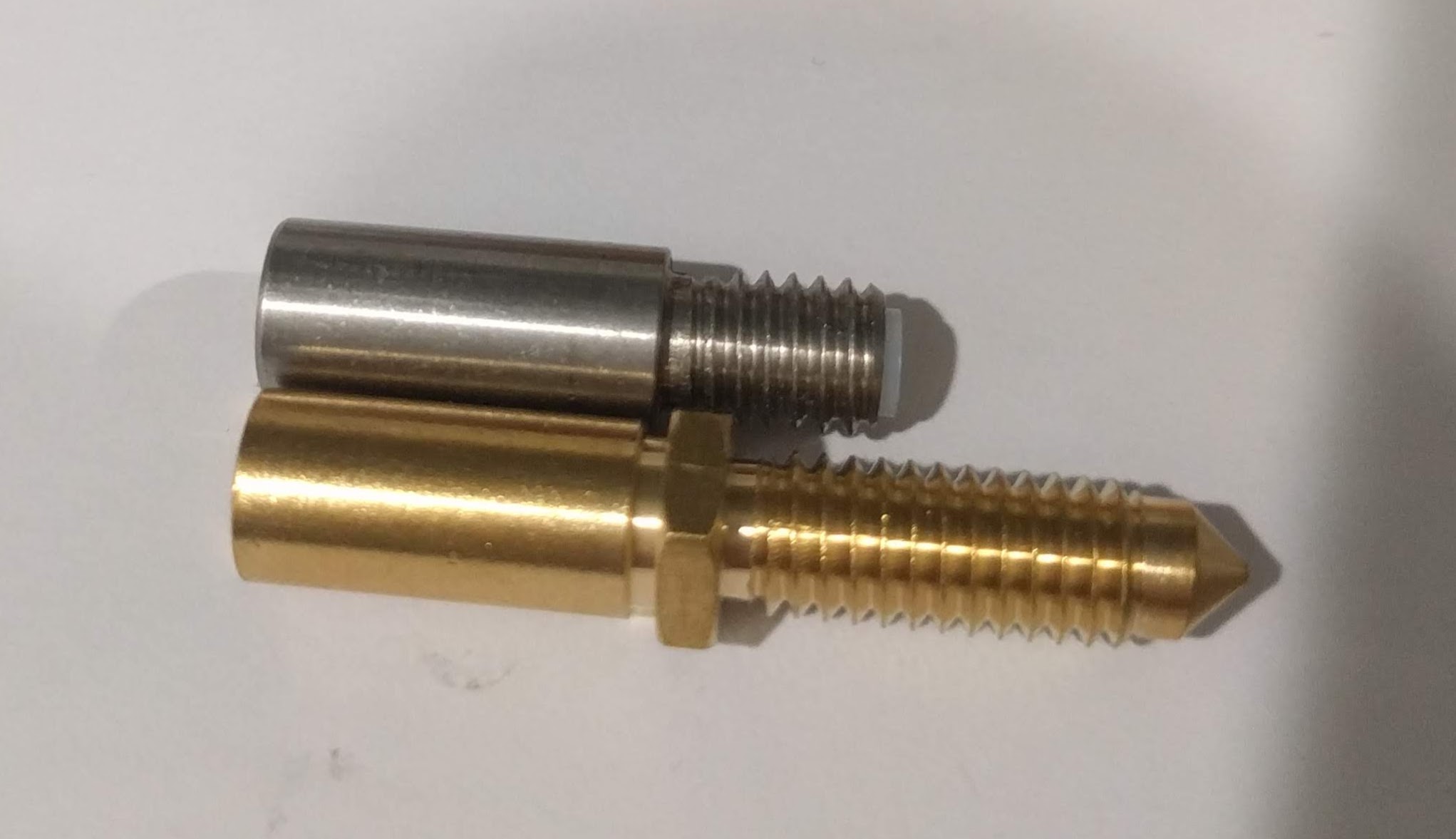 I have a feeling you are questioning my sanity at this point. Why would I do this? Well you see a traditional heat break tube has to be machined properly – the sides of the holes have to be polished. This takes time and makes it expensive, so creative folk have decided to save cost by adding a PTFE (Teflon) tube. 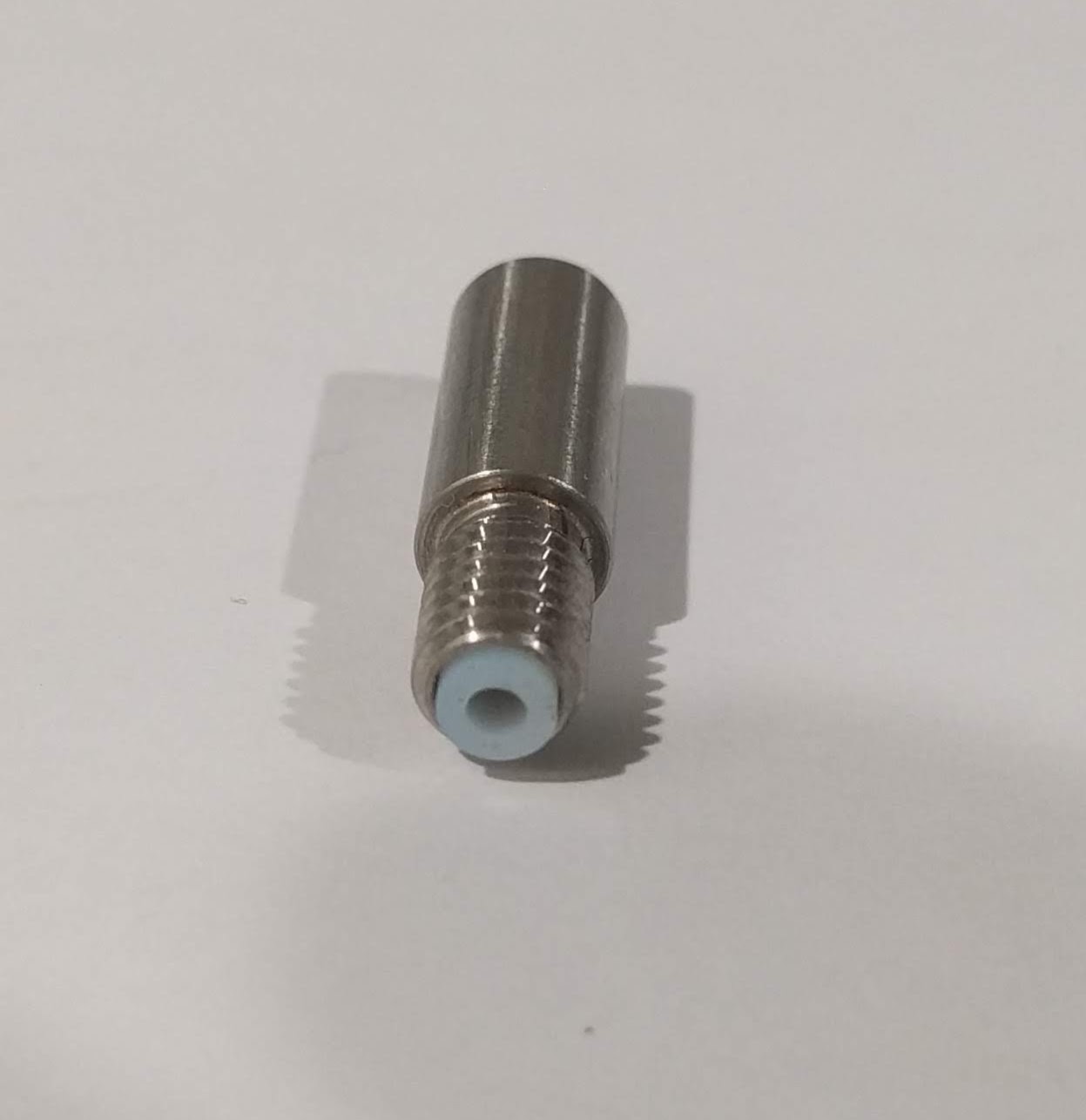 This saves on machining the tube, but ruins the whole “all metal” hotend concept, by adding back a piece of plastic. The purpose of an “all metal” design is to be able to allow the heater to reach high temperatures (above 300C) safely. High temperatures are needed to extrude some plastics like Nylon.

The PTFE tube would limit the usable range of the hotend to 260-270C.

In addition because the nozzle and the heat break tube don’t meet in a perfectly straight line there is always the issue with the filament locking and clogging in the heater block – it is not a terribly big problem, but annoying at times.

Enter the promise of the combined nozzle/heatbreak tube. By now you should sense another fail coming.

Also because the cooling block was not cool at all, the filament melted inside the Bowden tube clogging it and I was not able to move it up or down. It was complete and total disaster.

Once again, I had to dismantle the hotend,  cut the clogged Bowden tubes, make a new mount and re-install the original heatbreak tubes. After two dais of failures, I settled to just be able to print something.

I measured the temperature first and with one heater set to 215C, the cooling block was at 36C (28C ambient temperature). With two heaters it climber up to 45C- on the outside and 51C on the inside. Warm but manageable.

So here it is the current setup. 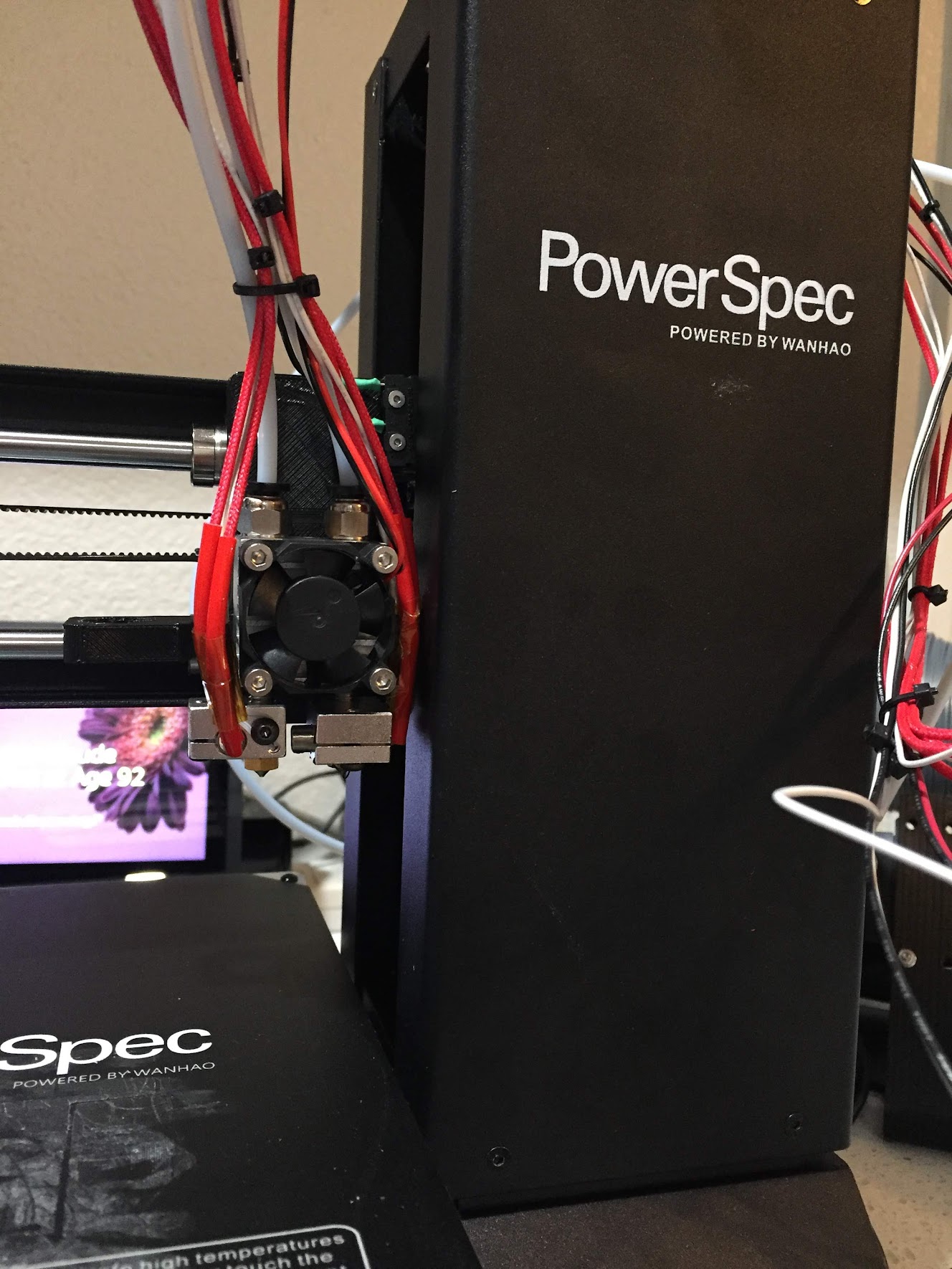 Naturally the left nozzle clogged on the first print. I’m not having a good feeling on this one. Like most E3D setups you have to watch the retraction amount. You have a choice between stringing and nozzle clogging.

On my old E3D V6 I was having lots of similar issues and the cure was to “oil the hotend” – sounded like a bunch of baloney at first, but then I tried it and it really improved my  clogging issues. I should try it on this setup as well.